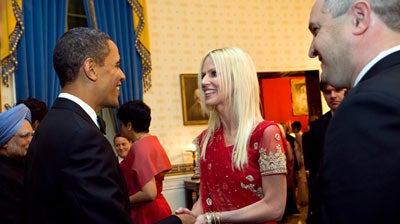 Not content with their moment in the spotlight at the White House state dinner, a Virginia couple is now seeking cash for their first television interview about the experience, the New York Times reported.

The couple, Michaele and Tareq Salahi, are becoming overnight celebrities for having breached security and crashed the White House dinner for the Indian prime minister last week.

The Times reported that television industry executives said that Michaele and Tareq Salahi had postponed plans for an interview Monday on CNN’s “Larry King Live” and were seeking "hundreds of thousands of dollars" for their first television interview.

“They are asking for best offers from all the networks,” one TV executive told The Times.

The couple are known as socialites in the DC region with aspirations to larger fame. Michaele Salahi was being considered for becoming a cast member on Bravo’s “The Real Housewives of D.C.” The couple apparently crashed the White House dinner in the hopes of improving their chances of getting cast in the show.

The incident, which may yet result in criminal charges against the couple, is only the latest high profile flap provoked by fame-seekers who hoped for a slot on a reality show.

Just over a month ago, the Heene family of Colorado won national attention for a hoax in which they claimed their six-year-old son Falcon had gone missing in a shiny weather balloon. The Heenes too had been hoping for a spot on a reality show.

The White House acknowledged Friday that President Obama met face to face with the Virginia couple who crashed the White House state dinner at the White House, as the Secret Service said that it was "deeply concerned and embarrassed" by the breach of security.

A Secret Service spokesman also confirmed that the agency was conducting a two-pronged inquiry into whether the couple, Michaele and Tareq Salahi, broke criminal laws, and how the president’s bodyguards came to let them inside what was supposed to be one of the world’s most carefully secured buildings.

In a picture released by the White House on Friday, Michaele Salahi is shown clasping Obama’s hand as he greets guests Tuesday in the receiving line in the Blue Room. Both are smiling. Her husband is shown looking on.