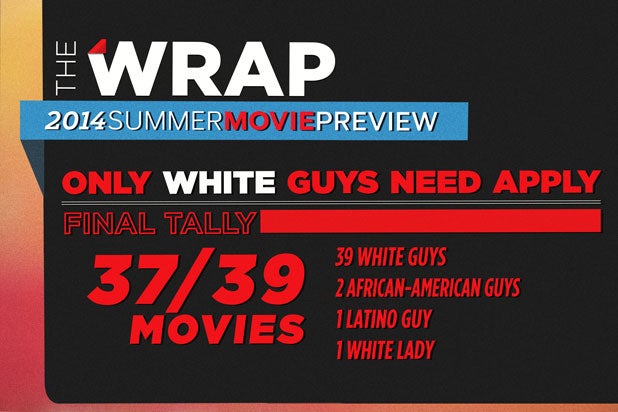 Just a few months ago, Oscar statues went for the first time to a Mexican filmmaker for Best Director (Alfonso Cuaron), to a black British man for Best Picture (Steve McQueen) and to a woman for Best Animated Movie (Jennifer Lee), a landmark year for diversity in Hollywood.

But this summer’s biggest releases are a throwback to another era, one you can revisit next Sunday in “Mad Men.” An analysis by TheWrap found that white men directed more than 90 percent of the summer’s biggest movies.

White men are directing or co-directing 37 of the 39 major releases this summer, including a biopic of legendary black entertainer James Brown. (Director Tate Taylor, who last directed “The Help,” is doing the honors for “Get on Up.”) White men are directing intimate dramas (“The Fault in Our Stars”), comedies (“Blended”), horror fare (“Deliver Us From Evil”), action movies starring women (“Lucy”), action movies starring men (“The Expendables 3”), effects-laden spectacle (“Transformers 4”) and revisionist fairy tales (“Maleficent”).

The exceptions are few: “Think Like a Man Too,” a comedy about a group of African-American couples, is directed by Tim Story and “When the Game Stands Tall,” a sports drama about De La Salle High School’s record-setting football team, directed by Thomas Carter. Both are African-American.

The other two exceptions are co-directing jobs — “Sin City: A Dame to Kill for,” co-directed by Robert Rodriguez, a Mexican-American who just launched a cable network targeting Latino audiences; and “Jupiter Ascending,” another sci-fi epic by Lana and Andy Wachowski the brother/sister combination who made “The Matrix” and “Cloud Atlas.”

For the purposes of this analysis we considered major releases by the six major studios (Universal, Warner Bros., Fox, Sony, Paramount and Disney), as well as independent studios Lionsgate and Relativity. Dimension’s “Sin City” sequel — a rare case of diversity — is included as a major release but movies by the specialty arms of major studios, such as Fox Searchlight and Sony Pictures Classics are not. Their movies tend to be more inclusive, but the releases also tend to be on fewer screens.

Searchlight, for instance, will release “Belle,” directed by Amma Asante and starring Gugu Mabatha-Raw, both black women, in May. The Weinstein Co. will release “Snowpiercer,” directed by South Korean director Bong Joon-ho, in addition to “Sin City 2,” but only “Sin City 2” will get the kind of national rollout major studios lavish on their biggest movies.

Major studios are not giving minorities — let alone women, a majority of the population — many chances to make the big budgeted movies they obsess over. (For more on the exclusion of women, take a look at this excellent report over at 538, Nate Silver’s new site).

A major exception to this rule would have been “Fast & Furious 7,” which is being directed by James Wan, the Malaysian filmmaker responsible for “Saw” and “The Conjuring.” The release of that movie was delayed due to the death of Paul Walker.

Have your doubts? Here’s the chart: