Critical favorites "A Prophet" and "The White Ribbon" are among the nine films named to the shortlist of movies that remain in contention for the Oscar for Best Foreign-Language Film.

The two films, the French and German entries in the Oscar race, respectively, have picked up the bulk of critics awards and international honors among the 65 films submitted to the Academy by various countries.

The most acclaimed film left off the shortlist is probably the Romanian entry, "Police, Adjective," a slow-paced, deadpan examination of police work and semantics.

Other films on the shortlist include Israel’s "Ajami," Australia’s "Samson & Delilah" and Peru’s "The Milk of Sorrow."

Also: Argentina’s "El Secreto de Sus Ojos," Bulgaria’s "The World Is Big and Salvation Lurks Around the Corner," Kazakhstan’s "Kelin" and the Netherlands’ "Winter in Wartime."

Six of the entries on the list were chosen by the vote of Academy members who attended special screenings; the final three spots were selected by an executive committee put in place after the failure in previous years of voters to choose acclaimed films like "4 Months, 3 Weeks and 2 Days." 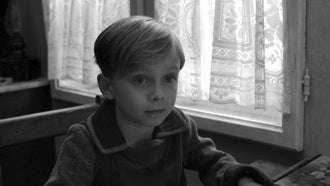 Speculation will immediately center on which of the shortlist films were voted by the membership and which were selected by the committee.  "Ajami" and "A Prophet" are certainly among the tougher, more forbidding entries on the shortlist, while "Winter in Wartime" and "The Secret in Their Eyes" are more obvious crowd-pleasers; Michael Haneke’s lyrical but creepy "The White Ribbon" (left) could fall in either camp.

From here, the final nominations will be determined by select, invitation-only committees who will view three films each day the last weekend of January.

Beverly Hills, CA — Nine films will advance to the next round of voting in the Foreign Language Film category for the 82nd Academy Awards®. Sixty-five films had originally qualified in the category.

The films, listed in alphabetical order by country, are:

Bulgaria, “The World Is Big and Salvation Lurks around the Corner,” Stephan Komandarev, director;

Foreign Language Film nominations for 2009 are again being determined in two phases.

The shortlist will be winnowed down to the five nominees by specially invited committees in New York and Los Angeles. They will spend Friday, January 29, through Sunday, January 31, viewing three films each day and then casting their ballots.

The 82nd Academy Awards nominations will be announced on Tuesday,

Academy Awards for outstanding film achievements of 2009 will be presented on Sunday, March 7, 2010, at the Kodak Theatre at Hollywood & Highland Center®, and televised live by the ABC Television Network. The Oscar presentation also will be televised live in more than 200 countries worldwide.