The American Society of Cinematographers gave its top film prize to “The White Ribbon” at a ceremony in Century City on Saturday night, making the Foreign-Language Oscar nominee a surprise winner over “Avatar,” “The Hurt Locker,” “Inglourious Basterds” and “Nine.”
By saluting Christian Berger’s black-and-white cinematography for Michael Haneke’s moody period drama, the ASC opted for traditional photography over the high-tech digital universe of “Avatar” or the low-fi, rough, hand-held aesthetic of “Hurt Locker.”
Throughout the nearly three-hour ceremony at the Hyatt Regency Century Plaza hotel, participants talked about how cinematography is at a crucial point in its existence, with the digital world epitomized by “Avatar” threatening to supplant the old methods of shooting films. 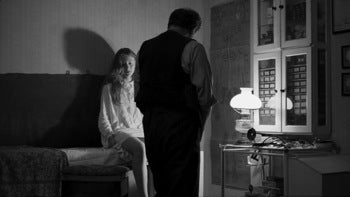 “Our skill is infinitely adaptable to any medium,” ASC president Michael Goi told the crowd. “ … Artistry drives technology.”
But when he accepted the group’s Lifetime Achievement Award, cinematographer Caleb Deschanel got a big ovation for making it clear which type of technology he preferrs: “I love the uncertainty of shooting on film and not knowing what you’re going to get,” he said. “When film goes through the camera, it’s a promise, it’s an idea … It’s a dream.”
The Oscar nominees for cinematography include “The White Ribbon,” “Avatar,” “The Hurt Locker,” “Inglourious Basterds” and the one entry not to receive an ASC nod, “Harry Potter and the Half-Blood Prince.”
Accepting his award, “White Ribbon” cinematographer Berger said that he’d been asked repeatedly whether he’d rather win the ASC honor or “the other award next Sunday,” i.e. the Academy Award. He said he’d refused to answer the question when journalists asked, and that he wouldn’t answer in his acceptance speech, either.
“But I think you know,” he said, to cheers from the crowd.
With its win, “The White Ribbon” became the first foreign feature to win the top ASC award since the French film "A Very Long Engagement" in 2005, and only the second one ever to do do.
Televison awards went to Eagle Egilsson for an episode of the TNT series “Dark Blue,” and Alar Kivilo for the HBO movie “Taking Chance.”
The awards:
Feature Film: “The White Ribbon,” Christian Berger
Television Episodic Series: “Dark Blue,” “Venice Kings” episode, Eagle Egilsson
Television Movie/Miniseries: “Taking Chance,” Alar Kivilo
Board of Governors Award: Morgan Freeman
Lifetime Achievement Award: Caleb Deschanel
International Award: Chris Menges
Career Achievement in Television Award: John C. Flinn, III
Presidents Award: Sol Negrin
CORRECTION: This story originally stated that "The White Ribbon" was the first foreign-language film to win the ASC award.  In fact, it was the second.
x
Looks like you're enjoying reading