Despite the sentiment of one of her most famous songs, Whitney Houston was definitely not every woman, but instead a talent on a larger-than-life scale.

In her directorial debut, actress Angela Bassett‘s depiction of the “Greatest Love of All” singer, played by Yaya DaCosta (“Lee Daniels‘ The Butler”), attempts to show the human side of the legend, but occasionally staggers along the very line it tries to cross — where genius-level skill meets basic human need for love, understanding and companionship.

The movie opens on 25-year-old Houston dressed in gold, riding in a limo to the 1989 Soul Train Music Awards, where she will meet future husband Bobby Brown, played by Arlen Escarpeta (“Final Destination 5”). The crowd’s cheering grows louder as the limo approaches.

“Time to be Whitney Houston,” DaCosta says to her friend and business partner Robyn Crawford (Yolonda Ross) with a subtle reticence, then checks her teeth for lipstick. 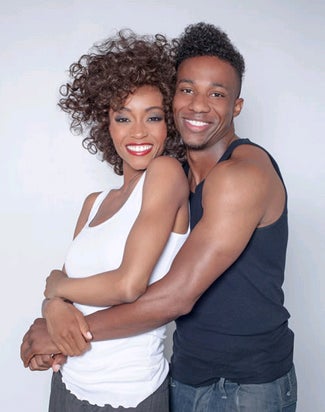 Throughout the Lifetime Original Movie, 32-year-old DaCosta is trussed up in Whitney-wear and hair to paint the singer in broad pop culture strokes inspired by some of the period’s most famous visuals of her — by photographers like David LaChappelle, Richard Avedon and Randee St. Nicolas, for instance, and video directors like Julian Temple of “I’m Your Baby Tonight” fame.

“Whitney” progresses from the singer’s first meeting with Brown, through their tumultuous courtship and wedding, Houston’s pregnancies (including a devastating miscarriage), starring role in film “The Bodyguard” and subsequent tour to support that film’s soundtrack.

Houston’s life comes across as if outlined in simple, declarative statements with limited depth of emotion and introspection. Maybe that’s how some people need to think a cultural icon lives her life — à la “I’m Every Woman” — but you can’t help but feel there’s a layer of truth missing. Despite the depiction of his and her vices, there’s an element of danger missing — the danger of what really happened in the end, that the world lost one of its musical treasures to overindulgence and addiction.

The principals here pull off a true, but still by-the-numbers love story with a believable mix of love, obsession and codependency.

When, for instance, Brown is ready to take their relationship to the next level, Houston tells him she’s slow to trust her own feelings, which he doesn’t take well. “I love you — straight up. If you don’t feel the same, this ain’t going to work,” Brown says after a lovemaking session in which he tries to make her forget about possible rivals for her affections, like actor Eddie Murphy (Reign Morton). He storms out, and Houston, the relationship’s drug-use instigator, turns to cocaine to adjust her fouled mood.

A long-distance booty call later sends Brown running back to Houston and ultimately leads to their engagement — much to her mother’s dismay. Gospel singer Cissy Houston (Suzzanne Douglas) is not happy with her daughter’s choice of Brown: “I spent my life trying to keep you and your brothers out of the projects; now you marrying into it? … You can take the boy out the ghetto, but not the ghetto out the boy.” Houston’s brother then chimes in that Brown has two kids by two different women — shocking.

DaCosta’s performance invites comparisons to contemporaries like “Gotham” actress Jada Pinkett Smith and Zoe Saldana of film “Guardians of the Galaxy.” Escarpeta’s portrayal of Brown elicits more sympathy than the real-life singer seemed to enjoy when stories of the couple’s troubles played out in supermarket tabloids.

Deborah Cox is not seen, but is heard throughout, performing some of Houston’s best-known songs. Aside from a few stray personal flourishes, Cox’s renditions honor the icon’s originals without resorting to precise mimicry. The Canadian singer should be proud of her work here — and Houston fans may want to ask themselves if they’ve listened to enough Deborah Cox lately.

Bassett, a goddess in her own right and seen currently on “American Horror Story: Freak Show,” shows promise behind the lens, giving Lifetime a better-than-average TV movie. She should shoot for stronger writing, better music supervision — the reggae selection for Houston and Brown’s first sexual encounter was a particularly unfortunate choice — and a bigger budget in her next outing. (Some of those cut corners showed.)

But if Bassett’s intention was to simply celebrate Houston’s music and talents, why bother showing even glimpses of the ugliness that took the singer from her friends, family and fans so prematurely? Fans looking for an ’80s-themed-celebrate-life party might do better busting out their own gold lamé gowns and “Whitney: Greatest Hits” DVD and dancing along.

Maybe there’s a sequel coming — “Whitney: The Haggard Years” — because despite its glittering superficial charms, this “Whitney” still feels a little half-baked.