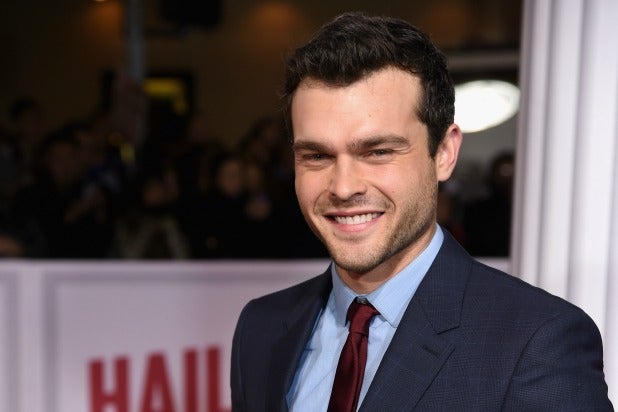 Move over, Harrison Ford. There’s a new Han Solo in town, though the name Alden Ehrenreich likely has most “Star Wars” fans scratching their heads and going, “Who?”

But the 26-year-old Los Angeles native has seemed poised for superstardom, judging by his skyrocketing acting career and the way he’s been steadily building up his impressive resume, culminating in a recent scene-stealing turn in the Coen Brothers’ “Hail, Caesar!”

From being discovered by Steven Spielberg himself — via a prank of a bat mitzvah video, no less — to checking off one auteur director after another, here are five things to know about Alden Ehrenreich — your new Han Solo.

One filmmaking icon helped him launch his career …
Ehrenreich was famously discovered via a bat mitzvah video he made with some friends that featured him cross-dressing. Steven Spielberg himself happened to be at the party, and his company DreamWorks got an agent for the then 19-year-old.

… and another gave him his first role
Francis Ford Coppola then cast Ehrenreich in his feature film debut, “Tetro,” a black-and-white family drama set in Argentina. Coppola would go on to cast Ehrenreich in another film, “Twixt,” and he would also work with Park Chan-Wook (“Stoker”), Woody Allen (“Blue Jasmine”) and the Coen Brothers (“Hail, Caesar!”) before landing “Star Wars.”

His last potentially star-making role almost didn’t happen
Before his very own “Star Wars” spinoff film, there was a possibility Ehrenreich could have become the next Robert Pattinson, when he landed the male lead role in YA adaptation “Beautiful Creatures.” But that gig almost didn’t happen since fellow up-and-comer Jack O’Connell had originally been cast in the role of Ethan. But the British O’Connell had trouble getting his work visa sorted out before filming began in New Orleans, and Ehrenreich was brought in at the last minute.

This isn’t the first big franchise gig he was up for
Ehrenreich was shortlisted for the role of Harry Osborn in the sequel to “The Amazing Spider-Man.” It was down to him, Brady Corbet and Dane DeHaan, but DeHaan ultimately won the right to play the Green Goblin opposite Andrew Garfield‘s web-slinging Peter Parker.

When Warner Bros. was putting together its cast for what would have been a big-budget live-action adaptation of Japanese manga “Akira,” Ehrenreich was also in this mix. This time, it was for the role of Tetsuo, the young antagonist of the film. Ezra Miller was also a finalist, but ultimately, the project was scrapped before anyone signed on.

He is no stranger to beating out scores of competitors for highly coveted roles
Just as the actor has experience in losing out on big roles, he’s also not new to beating out every other young actor for one either. Warren Beatty has been trying to mount his Howard Hughes biopic for years, and in the end, even though actors like Andrew Garfield, Justin Timberlake and Garrett Hedlund were all considered for the young male lead, Ehrenreich won the part and will be seen in the film opposite Beatty and Lily Collins this fall.

He is the third Coen Brothers alum to land a “Star Wars” gig
The modern Lucasfilm era seems to be looking at Joel and Ethan Coen for casting tips. Ehrenreich’s casting marks the third time a recent Coen alum will populate the “Star Wars” universe. Adam Driver and Oscar Isaac, who were both in “Star Wars: The Force Awakens,” starred together in the Coens’ 2013 Oscar-nominated “Inside Llewyn Davis.” Ehrenreich had a big breakout moment earlier this year in the Coens’ “Hail, Caesar!”

The new Han Solo film will be directed by Phil Lord and Chris Miller and will be released in 2018.