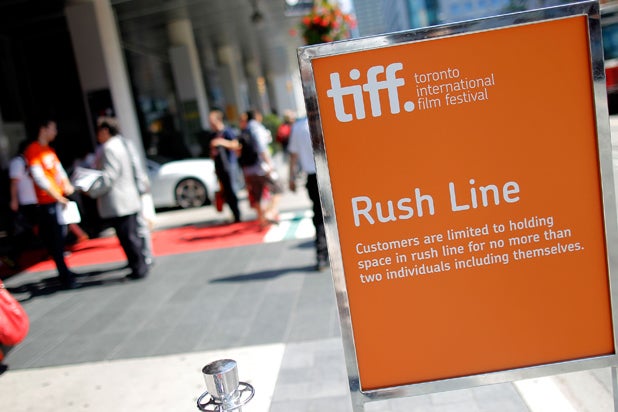 The independent film world enters the Toronto Film Festival buoyed by the success of smaller films at the box office, expecting one of the year’s most active markets for unsold movies.

Four films acquired at either Cannes, Toronto or Sundance surpassed or flirted with the $20-million mark since February: “Place Beyond the Pines,” “Mud,” “Fruitvale Station” and “The Way, Way Back.”

Roadside Attractions co-president Howard Cohen described that consistency as “pretty rare” — and predicted it would fuel the marketplace at this year’s Toronto Film Festival.

“Domestically, there’ve been interesting standouts through the summer and in that indie space grosses seem to be solid again,” Alex Walton, Exclusive Media’s president of international sales and distribution told TheWrap.

Buyers and sellers contacted by TheWrap leading up to the festival singled out several titles to watch, including Exclusive’s “Can A Song Save Your Life,” the John Carney-directed tale of a music business executive (Mark Ruffalo) who teams up with an aspiring musician (Keira Knightley). Eli Roth’s first film six years and Daniel Radcliffe‘s “Horns” could net top dollar as well.

Also read: 14 Movies That Should Sell at Toronto

Here are four things industry players headed to the festival have on their mind: Will the Weinstein Co. run roughshod over everyone again?
The Weinstein Co. has been on a buying spree all year, boxing out distributors at the year’s top festivals. Harvey Weinstein and David Glasser walked out of Sundance with “Fruitvale Station,” which won two the festival’s top awards and is expected to garner at least a few Oscar nominations next year.

Then they strolled into Cannes and bought everything they could, paying almost $7 million for Stephen Frears’ “Philomena” and buying another five titles before the market was done.

They bet on troubled productions like “Jane Got a Gun,” beloved scripts like “Passengers,” and talented actors and directors like “Suite Francaise,” which stars Michelle Williams, “Carol,” directed by Todd Haynes, and “The Young and Prodigious Spivet,” a 3D film from the director of “Amelie.”

And its multi-platform label RADiUS bought the year’s top documentary at Sundance (“Twenty Feet From Stardom”) and Keanu Reeves’ directorial debut at Cannes.

So this means they’ll back off at Toronto, right?

“I expect they’ll be able to find space in their schedule,” Walton joked.

(And sure enough, the Weinstein Co. bought a title before the festival even began — “Tracks,” John Curran’s film starring Mia Wasikowska as a woman who tries to fix her life after the end of her marriage and the death of her mother.)

Have CAA and WME cornered the market?
CAA is shopping 18 titles and WME is selling 12 – a staggering number for any firm to track. Hollywood’s two largest agencies will pocket nice fees when their films sell, but their grasp on the market has provoked concern from distributors and rivals.

“There’s only a certain level of capacity and bandwidth in any person and their cell phone,” the head of acquisition at one buyer told TheWrap. The executive declined to speak on the record on this subject for fear of angering the two agencies controlling most of the market.

An executive at a rival company said sales agents looking for a big score might as well give up if they don’t work at CAA. “It’s fruitless,” the person said.

Yet Cohen told TheWrap any concern about these two agencies controlling all the titles was senseless, noting that a few of his biggest acquisitions last year were from his former shop, UTA.

Cohen knows a thing or two about Toronto, where Roadside bought several titles last year and nabbed Oscar nominee “Margin Call” the year before. What stuck out to Cohen was the number of films that were co-represented by agencies that are fierce rivals in every other area.

“Every movie has like 3 agencies on it,” Cohen said. Indeed, CAA has a partner on 8 of its 18 titles.

“It’s definitely odd,” Cohen said, but it’s also easily explained. “The money is there and we all want a part of it.”

Several of the most profitable films in recent memory are horror movies, from this summer’s “The Conjuring” and “The Purge” to the “Saw” and “Paranormal Activity” franchises.

Studios all over town are working on found footage and microbudget movies, and don’t expect that to stop up north. One distribution executive described Colin Geddes’ midnights section as “one of the best genre slates of the year.”

It’s where buyers discovered “Insidious” and where Roth’s “Cabin Fever” had audiences cowering in thier seats more than a decade ago.

Will a new distributor take the market by storm?
There are more distributors than ever, and one prominent sales agent said the number of reputable ones has increased from a half dozen to as many as 18. That makes the process of selling more labor-intensive.

Yet despite the increased number of avid buyers, there always seems to be a distributor or two who makes the most noise. Could it be A24? That company launched at Toronto last year and started snapping up titles within a few weeks, including Toronto favorite “Ginger & Rosa” and Sundance darling “The Spectacular Now,” starring up-and-comer Miles Teller (right).

“They have great possibilties to become an important new distributor in the field,” Foresight Unlimited CEO Mark Damon told TheWrap.

Could it be Cinedigm? Though a few years old, their ambitions have grown even in the past few months as they snatched up the top title at South by Southwest, “Short Term 12.”

Or could it be someone brand new, like the new operation at Paramount run by Syrinthia Studer and Jeff Deutchman?

“They haven’t done anything,” one lamented. “Yet.”