Whoopi Goldberg apologized Monday night for comments she made on “The View” earlier in the day about the Holocaust, saying she was sorry “for the hurt I have caused.”

Goldberg had drawn wide criticism for the remarks she made during the show panel’s “Hot Topics” discussion, as the hosts began discussing the banning of the graphic novel “Maus,” which tells the story of author Art Spiegelman’s father and his experience in German concentration camps, with Jews depicted as mice and Nazis as cats.

“Let’s be truthful about it — because the Holocaust isn’t about race. No. It’s not about race,” she said. “It’s about man’s inhumanity to man. That’s what it’s about.”

By mid-evening, Goldberg had apologized in a brief statement posted to Twitter.

You can watch the full discussion from Monday’s show in the video above.

Her co-hosts tried to get clarification on what she meant, pointing out that the Nazis did, in fact, believe that Aryans were “the master race.” But Goldberg doubled down.

“These are two white groups of people. You’re missing the point,” Goldberg added. “The minute you turn it into race, it goes down this alley. Let’s talk about it for what it is. It’s how people treat each other. It’s a problem. It doesn’t matter if you’re Black or white, ’cause Blacks, whites, Jews, everybody eats [the] other.” 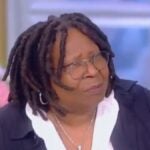 “WTF? This is insane. The extermination of 6 million Jews wasn’t about race???” Piers Morgan tweeted. “Will any rock stars or renegade royals now boycott Whoopi Goldberg and/or ABC for this dangerous misinformation?”

“I love Whoopi Goldberg, but this take of hers on the Nazis and the Holocaust is… not it,” Perez Hilton wrote. “Her The View cohosts were trying to guide her out of this hole. She just dug in even deeper!”

You can check out more reactions below.

Andi Ortiz contributed to this report.