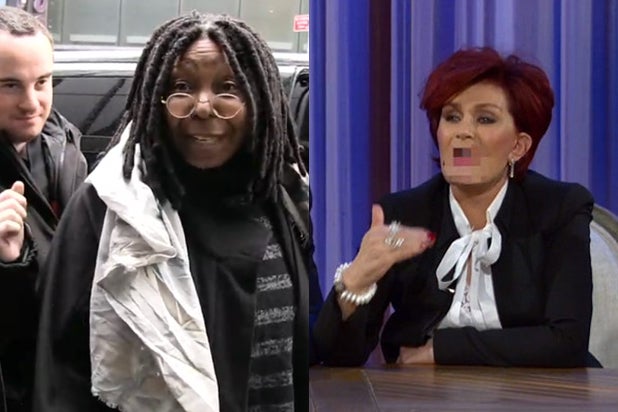 Whoopi Goldberg is the third “View” host to publicly comment on “Talk” host Sharon Osbourne’s suggestion that everyone (except Barbara Walters) on the rival show could “go fuck themselves,” telling a paparazzo “who cares?”

Initially, Goldberg appeared not to know what the paparazzo, who cornered her in Times Square on her way into a waiting car, was talking about when he asked her how she “felt about Sharon.”

“What did she — what about her?” Goldberg asked.

“Who cares?” she shrugged.

While “The View” hasn’t addressed Osbourne’s comments on the show (and a spokeswoman for it declined to comment), Goldberg’s co-hosts Sherri Shepherd and Jenny McCarthy tweeted and talked to “Entertainment Tonight,” respectively, about them.

So far, no one from “The View” has sunk to Osbourne’s level and fired shots back at her or her show, which still trails “The View” in the ratings.

Osbourne apologized for the comments, made during an appearance on “The Arsenio Hall Show,” on her own show on Thursday, saying that she was “inappropriate” and “trying to be funny at somebody else’s expense.”