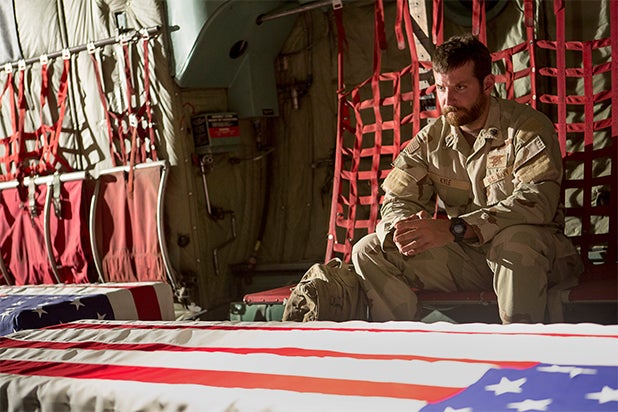 The New England Patriots spent this past weekend earning a spot in the Super Bowl. But many more patriots went to the movies and propelled “American Sniper” to a record-setting January box office weekend.

In doing so, they officially declared war against the likes of Michael Moore, Seth Rogen and so many liberal, peace loving, pot-smoking A-listers and Hollywood suits who, since the 1970s, have had an ambivalent, if not disdainful relationship with war movies in general, and American patriotism in particular.  “American Sniper” has now given Red State (and, yes, even some Blue) moviegoers the green light to enjoy a movie with a genuine hero who served his country and fought in a righteous war.

It’s about time. With few exceptions, American servicemen couldn’t catch a break in movies. They were depicted as either inhuman or damaged beyond repair. Bravery disregarded, their service unappreciated, they returned to their country broken, drunken, and friendless. Even worse, the cause that sent them to foreign battlefields was deemed senseless. By the time the closing credits rolled, neither heroism nor flag-waving was possible. Audiences were sent home revolted by what men in uniform were asked to do.

Remember these films?  “The Deer Hunter,” “Coming Home,” “Apocalypse Now,” “Platoon,” “Born on the Fourth of July,” “Full Metal Jacket,” and “The Thin Red Line” — Hollywood classics that typified the “war is hell” motif and the indictment against America that its wars, especially in southeast Asia, squandered lives and traumatized veterans who would never be able to re-integrate themselves back into society.

This wasn’t always the case in Hollywood. During its Golden Era, from the 1930s up until these Vietnam War screeds, American soldiers were glamorized as larger than life heroes in such films as “Battle of the Bulge,” “The Guns of Navarone,” “Midway,” “Patton,” “PT 109,” “The Dirty Dozen,” and “The Bridge on the River Kwai.”  With World War II as their backdrop, America’s overseas involvement was regarded as noble, its military courageous, its cause unimpeachable. More recently, the honor and duty of a “Saving Private Ryan” fit this bill, too. Soldiers returned home to ticker tape parades, not alcohol treatment facilities. And they lovingly embraced their wives rather than being unable to look them in the eye.

Many of the post-9/11 films have been faithful to this impulse to morally indict America’s military. Derisively referred to in the industry as “sand movies,” these films—“In the Valley of Elah,” “Green Zone,” “Redacted,” “Jarhead,” and “The Hurt Locker — were all box office disappointments.  “Zero Dark Thirty” and “Lone Survivor” were exceptions, but in each of these films the cause was just, the enemy clear and the resolve unwavering.

This love affair with “American Sniper” can be explained as a coming out party for American patriotism, courtesy of an unlikely source — Hollywood.  It is the very best example of a good old-fashioned, unapologetic, kick-ass pro-American war movie. Bradley Cooper, portraying Navy SEAL Chris Kyle, is a marksman who fires sure shots and pulls no punches. His job is to protect his fellow combat soldiers and avenge his country that was attacked on 9/11.

The film reclaims the good versus evil storylines of cowboy westerns that Clint Eastwood, the film’s director, knows something about — finally restored to wartime settings after decades of Hollywood’s war against the war movie.

In simplifying the message, America is, once again, a force for good, which must be refreshing to many given this administration’s halting efforts to wage a war on terror, and its general distaste for fighting the good fight.

Michael Moore and Seth Rogen can snipe all they want about Clint Eastwood’s latest film. Should they foolishly show up at his house, it will make his day. Meanwhile, Americans are voting at the box office, resoundingly patriotic and grateful that Chris Kyle once stood watch on the wall in defense of his country.

View In Gallery
BIO Thane Rosenbaum
Thane Rosenbaum, a novelist, essayist and law professor, is the author of numerous books of fiction and nonfiction, including the forthcoming "How Sweet It Is!", along with essays in such publications as in the New York Times, Wall Street Journal, Washington Post, Huffington Post, and the Daily Beast, among other national publications. He is a Senior Fellow at NYU School of Law where he directs the Forum on Law, Culture & Society. www.thanerosenbaum.com.

Thane Rosenbaum, a novelist, essayist and law professor, is the author of numerous books of fiction and nonfiction, including the forthcoming "How Sweet It Is!", along with essays in such publications as in the New York Times, Wall Street Journal, Washington Post, Huffington Post, and the Daily Beast, among other national publications. He is a Senior Fellow at NYU School of Law where he directs the Forum on Law, Culture & Society. www.thanerosenbaum.com.
x
Looks like you're enjoying reading