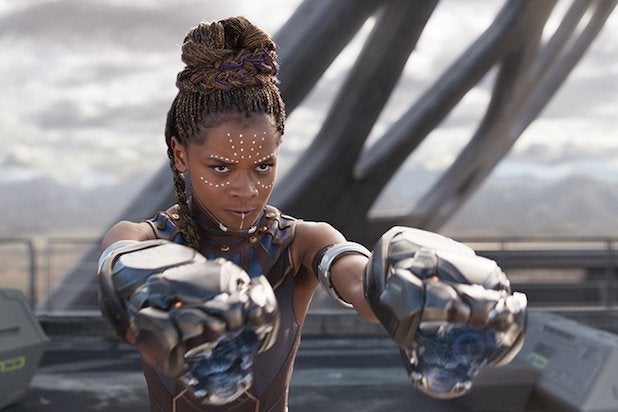 Something interesting happened this morning. I slipped on my usual black leotard and leggings for ballet class and as I was heading out the door, I caught my reflection in the mirror and smiled.

“Yes,” I thought, “Black Panther.” It was the first time, in maybe ever, that I looked like a superhero to me. And at my age, that says an awful lot.

Like almost every other person of African descent in America, I was determined to see “Black Panther” in its opening weekend. And so, my husband, two kids and I attended a PGA screening Thursday night. The theater was packed. It was — as industry events tend to be — about 90 percent white. And yet, we were one big happy Wakanda family!

The joy and exultation in that theater was electric. As the credits rolled, we bellowed and cheered for this extraordinary cast and crew. Some of us may have cried. A brilliant African-American director, a phenomenal female cinematographer, a predominantly black cast, a thought-provoking script, an astounding wardrobe, a soaring score, beautiful set design — every bit of it was worth celebrating.

But for me, it was the images that stood out: fierce, wise, women; brave warriors; innovative tech geniuses; multilingual, complex, layered, passionate characters in abundance. Sure, we have seen this before. But with a slew of talented, black actors inhabiting all these roles? And on this grand a scale? Never. And that is why “Black Panther” is so exceptional. Because it’s not just a select group witnessing these inspiring images, it’s the world. And therein lies its power.

I am the child of immigrants. And I am black. And Asian. And indigenous. And a woman. So I take on everyone’s suffering, collectively. And when any one of those subgroups triumphs, I celebrate it. And I try to hold on to that sense of power.

I felt it the week we took down Harvey Weinstein. And the day after we elected Barack Obama. And the night both Halle and Denzel won their Oscars. I felt it watching Mirai Negasu land her triple axel last week. This realization that all the things I was told were possible when I was little might not just be hypotheticals.

Many of us grew up hearing it: “You can do anything you set your mind to.” “Anything boys can do, girls can do.” “You is kind, you is smart, you is important…” Well, maybe not that last one. But ideally, as kids we had parents, teachers and mentors who encouraged us to strive and succeed. To dream big… but still, the images out there of those actually achieving on a grand scale were limited. They were predominantly white and predominantly male.

And if you happened to not be those two things you were left using your imagination more often than not. Of course, there are outliers. But it would have done wonders for many of us to see some sort of reflection of ourselves, repeatedly, in a positive light.

It’s not a level playing field. It never has been. And girls, children of color, those who grew up in lower-income households, learn that younger than others. So to see someone who looks even remotely like us in a position of power or being lauded in some way can be a huge boost to one’s sense of self. Even if those characters are fictional. It’s the visual we cling to. The image. Be it on television or in a film or on a poster or a limited edition cup. That’s me! That could be me!! And for millions of us of African descent, this is the first we are seeing such. And it is a revelation.

Also Read: 'Black Panther': All the Box Office Records It Has Broken So Far (Photos)

That triumph is further magnified by the knowledge that these images will be spread far and wide. That a studio felt this was a story worth spending a good deal of money on and promoting in earnest. That this was not a niche film. And knowing that the world is viewing us in this positive way is staggering.

As black people, we are not a monolith. We are raised in different places and have different cultures and customs and languages. Even in the U.S., we have varied personal stories of how we arrived on these shores. We are complicated and layered and profound. And we can be beautiful and we can be elegant and we can be vulnerable and we can be strong.

We can be all those things at once — and we can own it. And in “Black Panther,” Ryan Coogler has managed to capture that. That is the beauty. That with this one piece of art, he has bestowed upon us an invaluable gift. He has held up a mirror and said: See, you are all these things. All these things are within you. They have always been there. Take it. Own it. It’s yours.

And that is a very powerful thing.

View In Gallery
BIO Robinne Lee
Robinne Lee is a Los Angeles-based actor, writer and producer. Her film credits include "Hitch," "Seven Pounds," "13 Going on 30," "Fifty Shades Darker" and "Fifty Shades Freed." She recently starred opposite Mario Van Peebles in Syfy's "Superstition" and in Bounce's "Greyson Family Christmas." She is also the author of the critically acclaimed 2017 novel "The Idea of You."

Robinne Lee is a Los Angeles-based actor, writer and producer. Her film credits include "Hitch," "Seven Pounds," "13 Going on 30," "Fifty Shades Darker" and "Fifty Shades Freed." She recently starred opposite Mario Van Peebles in Syfy's "Superstition" and in Bounce's "Greyson Family Christmas." She is also the author of the critically acclaimed 2017 novel "The Idea of You."