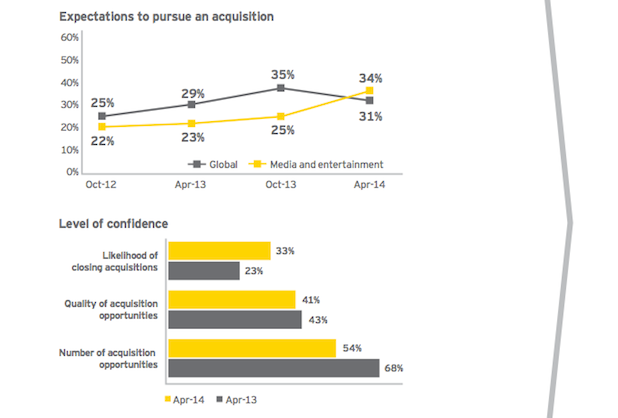 Comcast and AT&T have already pledged $112 billion for two acquisitions in the past few months, and this is only the beginning of a feverish few years of dealmaking, according to a new report by Ernst & Young. This is the second report in as many weeks projecting billions of dollars will change hands as media conglomerates try to outflank competitors and new rivals by getting bigger.

With the rise of YouTube, Netflix and Hulu, traditional media and cable companies are consolidating to dictate terms as best they can. Comcast and AT&T want to provide video and internet services — without paying an arm and a leg for those videos.

“Size matters,” Tom Connolly, Global Leader of Media & Entertainment, Transaction Advisory Services at Ernst & Young, told TheWrap. “These companies want to do what they can to maximize geographic reach and customer reach for when they are negotiating.”

According to Ernst & Young, 34 percent of companies said they plan to pursue an acquisition this year, and 61 percent said digital transformation will affect their strategy. Pursuit of a digital strategy helps explain smaller deals like Disney’s acquisition of Maker Studios and the recent pursuit of Fullscreen by companies such as Yahoo and Relativity Media.

Time Warner, Disney and Comcast want to own as many different producers of content as they can, so that the people who own the pipes must deal with them if they want high-quality product.

These companies have money to spend after mostly sitting tight and not making any deals (Disney, quite active, was an exception). Companies that bought a lot of their stock back from investors during the recession, and watched as the value of said stock rose, are now using that stock to buy scale.

Both Comcast and AT&T are using stock as the primary currency in their proposed deals for Time Warner Cable and DirecTV, respectively.

“There was a dearth of deal activity over the last four to five years,” Connolly said. “The media and entertainment companies were not doing deals. Think about that pent up demand.”

Banks are also more willing to loan them money. The companies are taking on even more debt than they did in 2007, the year before the recession, but they have the cash flow to justify it. While just 36 percent of companies thought more credit would be available in the future based on polling last April, that number has climbed to 52 percent.

Connolly compared this consolidation to the music industry, which may not comfort CEOs.  The music industry is much smaller than it used to be, as people stopped paying as much to listen to music, and stopped buying physical products like CDs en masse.

Digital distribution has not affected the TV and movie industries in the same way, but it has begun. Few traditional media companies have been quick to adapt.

Executives remain optimistic about the future, according to the report, but these deals could cost people their jobs. Companies will reduce the size of their work force, eliminating redundancies as they acquire companies that perform some of the same functions. Yet that does not mean an increase in unemployment. Here, the rise of the technology industry is a savior, not a threat.

“If you look at overall employment in the U.S., it has changed in a positive way,” Connolly said. “Fewer people are filing for unemployment. Technology start-ups and companies funded by venture capital, it is amazing how much money is funneling into the market to start new businesses.”