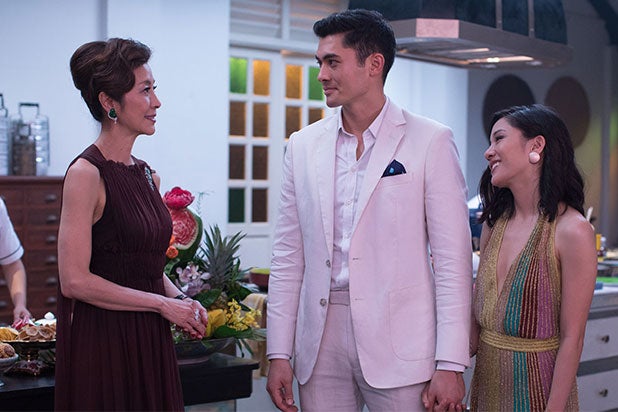 At its core, “Crazy Rich Asians” is a romantic comedy with a happy ending, a genre I usually avoid. But I went to see it because I found Kevin Kwan’s book of the same title deliciously delightful in how it satirized the super-rich Singapore Chinese and because the movie has become a political and cultural phenomenon.

The movie has led the Hollywood box office since its release on August 15. That’s happy news for the creative and business forces behind the movie and book. These folks were undoubtedly anxiety-ridden about whether a major Hollywood film with an all-Asian cast would break through in an America that is only 6 percent Asian American. About 40 percent of the early movie audiences in the U.S. were of Asian descent.

Some Asian American journalists and critics have gone gaga over the film because it shows Asian and Asian American actors in leading and supporting roles. It even has Asian men being the object of sexual fantasies (suggested, not explicit) of beautiful Asian women, a rarity in Hollywood films.

This issue of not being represented well on the big screen has nagged at Chinese Americans and other Asian Americans for a long time. When the civil rights movement of the 1960s and 1970s unleashed the plaintive voices of various American minority communities, newly emboldened Asian American activists, mainly in California and New York, cried out for, among other things, more and better “media” representation, meaning TV and movies.

Wayne Wang’s “The Joy Luck Club,” based on Amy Tan’s best-selling book, broke through the yellow glass ceiling 25 years ago. Now, it appears “Crazy Rich Asians” is doing the same, but with greater impact because the Asian American population is larger, more mature, and has social-media platforms to keep informed and in touch in ways nonexistent a quarter century ago.

Also Read: This Is What 'Crazy Rich Asians' Meant to Its Fans: 'My Heart Is Bursting'

As uplifting as the film may be to Asian Americans and Hollywood moneybags that see nothing but green, “Crazy Rich Asians” is hardly a perfect vehicle.

For one thing, it can — and probably will be — used as a confirming stereotype that brands all Asians and Chinese as super-rich. That stereotype is already out there, in America and all over the world, especially for ethnic Chinese.

It’s true that some Singapore Chinese are wealthy beyond imagination, as are a growing number of mainland China and Taiwan Chinese, and Chinese Canadians and Chinese Americans.

Most of us, however, are not. Many of us may certainly aspire to having more money and maybe fame, but a lot us won’t get there, and that’s all right.

Moreover, the book and movie’s title use of the word “Asian” is quite misleading, as the story told is only about Singapore Chinese, with a nod to Hong Kong Chinese and Shanghai Chinese. That leaves out many Asians all over the world, most of whom are poor, working class — or middle class at best.

Even before the movie is released in Singapore, where it is set, non-Chinese Singaporeans — Indians and Malays — have complained that the movie and book don’t include them. Ethnic Chinese make up three-fourths of the 5.6 million Singapore population.

Author Kevin Kwan, a Singaporean-American, and director Jon Chu, a Chinese American, have rightfully asserted that this is a specific story about certain Asian upper classes, and it can’t and shouldn’t be thought to represent all Chinese and Asians.

I also want to push back on the putdown of Chinese Americans that pops up in “Crazy Rich Asians.” Michelle Yeoh’s character, Eleanor Young, the snotty, steely mother of the male lead, doesn’t like her son’s girlfriend, Rachel Chu (Constance Wu), a Chinese American economics professor at New York University.

Eleanor, superbly played by Yeoh, hires a private investigator to check Rachel’s background and finds that Rachel wasn’t even American-born, but was six months old when her mother brought her to America, and that Rachel’s father is mysterious and certainly unworthy of the haughty Young family of Singapore.

Eleanor tells her husband in the book, not the movie: “…Her family comes from some ulu ulu [remote, far from civilization in Malay] village in China that nobody has ever heard of…they were most likely working class. In other words, they are PEASANTS.”

What exactly does Eleanor Young object to about Chinese Americans and other Americans? “They just want to be happy,” or words to that effect.

And, really, what is wrong with that?

William Gee Wong, author of "Yellow Journalist: Dispatches From Asian America," is writing a memoir featuring his father, an immigrant during the Chinese exclusion era (1882-1943).