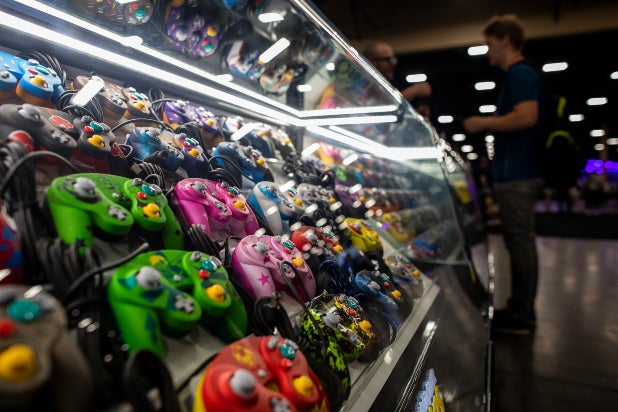 Why Digital Gaming Is Expected to Increase This Summer

”This year isn’t like most, so we’re seeing major titles come out regardless of the season,“ SuperData analyst Carter Rogers tells TheWrap

Digital sales of new video games are expected to gain steam this summer as the industry drops several blockbuster releases, and consumer spending could set a new monthly record for what is otherwise a typically slow sales season.

June’s digital console games sales are expected to surpass May sales, thanks to new releases this month that include Naughty Dog’s “The Last of Us Part II,” Riot Games’ new first-person shooter title “Valorant,” and a third season of “Fortnite.” July, typically the slowest month of the year for the industry, also will see the release of Sony Interactive Entertainment’s first-person action-adventure game “Ghost of Tsushima.”

SuperData analyst Carter Rogers said that this summer is very unusual for game publishers, who typically avoid putting out new products during vacation months. A global pandemic is keeping families home well into the after-school season, which means that consumers of all ages still have more time to play games.

“Given how the past few months have seen heavy spending on gaming, it wouldn’t be a surprise if we see a new June record for game revenue,” Rogers said, noting that consumer spending will be impacted by both game releases and how existing games update their content and online services.”‘The Last of Us Part II’ will play a part if that happens, but the ongoing performance of a wide range of live services will have a bigger impact on the market’s overall revenue.”

SuperData reported gamers spent $10.2 billion on games in May, down $300 million from $10.5 billion in April. May game sales trailed April’s numbers by roughly 27%, according to Nielsen’s SuperData, which compiles monthly reports for worldwide digital games sales on console, mobile and PC.

Rogers said a lack of new games released in May naturally drove the sales figures down.

Also Read: Why Video Games and Esports Will Thrive Post-Pandemic

In June, however, post-apocalyptic zombie hunting console adventure game “The Last of Us Part II” debuted in reportedly a big way. Publisher Sony Interactive Entertainment hasn’t released any sales figures for the game yet, but GamesIndustry.biz reported on June 21 that the PlayStation exclusive title was its fastest-selling game ever released in the United Kingdom — and the biggest U.K. boxed game launch so far this year, selling roughly 40% more than the previous leader, Nintendo’s “Animal Crossing: New Horizons.”

June is usually a slow month for game releases, but July is notably the slowest of the year, making the release of “Ghost of Tsushima” on July 17 unusual. It follows the player as the last Samurai warrior struggling to survive on a remote Japanese island after the Mongolian invasion of China led by Ghengis Khan.

“Publishers have often refrained from big launches in the middle of summer, given concerns people are doing other things like traveling. However, this year isn’t like most, so we’re seeing major titles come out regardless of the season,” Rogers said. “That’s likely why Sony felt comfortable launching their big upcoming game ‘Ghost of Tsushima’ in July.”

“League of Legends” publisher Riot Games tried its hand at its first multiplayer shooter game when it launched “Valorant” on June 2. The free-to-play game drew worldwide attention, and it is expected to boost gaming download statistics in June, Rogers said.

Consumers spent less money on games throughout May because fewer new games came out compared to the previous two months. In the absence of game sales, players flocked in droves to download free games from the Epic Games Store, including complimentary copies of “Sid Meier’s Civilization VI” from publisher 2K and Rockstar Games’ “Grand Theft Auto V.”

A rise in mobile gaming spending during May — roughly a 3% growth — helped offset the gap. 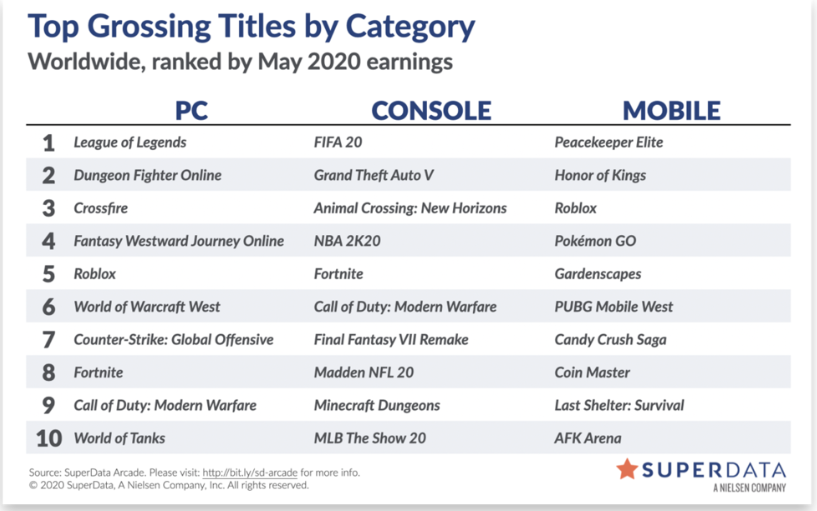 Riot Games’ “League of Legends” was May’s top-grossing title, retaining its first-place spot for a second consecutive month, while Electronic Arts’ “FIFA 20” soccer simulation game sold the most console copies in May.

May’s biggest new release was “Minecraft Dungeons,” a spinoff of developer Mojang’s classic bricklaying building game. “Minecraft Dungeons” gained 1.8 million players after its May 26 launch, but SuperData noted “elements of its business model limited its revenue potential” — including its low price (only $20) and the fact that it was offered immediately to any Xbox Game Pass subscribers who, for a $5 monthly subscription, get access to hundreds of on-demand games on the Xbox.

“Fewer new releases compared to March and April was indeed the main factor holding back earnings,” Rogers said. “Console revenue is especially dependent on launch sales from the latest hits, which is why digital console revenue fell so much from April to May.”