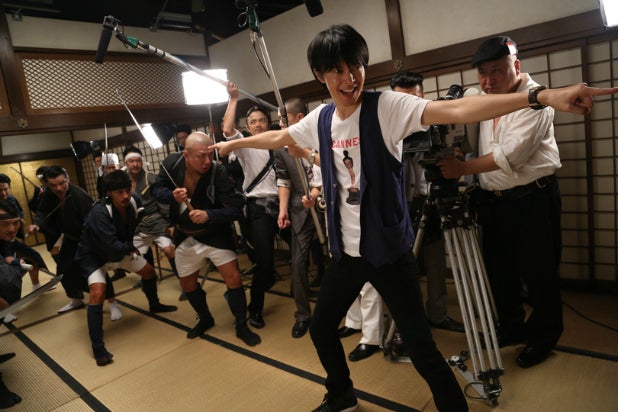 Sion Sono’s “Why Don’t You Play in Hell?” delivers adrenaline, chutzpah, and fake blood by the bucket-load, continually confounding audience expectations while offering up a twisted valentine to moviemaking in general and the disappearing medium of 35mm film in particular.

It gushes with both viscera and manic energy, but fans of intensely outrageous movies shouldn’t let the former scare them away from the latter.

Based on the two films I’ve seen from this prolific Japanese writer-director, it’s no easy task to summarize one of his plots. While you’re watching a movie like “Why Don’t You Play in Hell?”, newly opening in the United States, the characters, story, and incidents make perfect sense; trying to recount it later, however, is like describing a dream and connecting the dots between a series of bizarre events.

Young Michiko sings a toothpaste jingle that everyone loves, but her TV commercial gets pulled when her mother goes to jail for wounding and/or killing enemies of Michiko’s gangster father Taizo. (The little girl, wearing a white dress, comes home only to slide across an apartment-wide puddle of blood in a scene that suggests what would happen if that elevator in “The Shining” opened onto those ghostly twins.)

Meanwhile, teenage would-be director Hirata, leader of a film collective known as the The F–k Bombers, sees young Sasaki beating up another kid and dubs Sasaki “the new Bruce Lee,” giving him Lee’s iconic yellow-and-black track suit. (Younger viewers will recognize this outfit as the one Uma Thurman sports in “Kill Bill.”) They hang out at a local community center and dream of the great movies they’ll make one day.

Also read: ‘A Most Violent Year’ Review: Jessica Chastain, Oscar Isaac Chase the American Dream, by Hook or by Crook

Ten years later, Michiko’s mother is getting out of prison, and Taizo wants his daughter to star in a movie so her mother won’t know that her career has stalled over the last decade. They’ve got only one night to make a film, and only those aging slackers the F-Bombers, still hanging out in the shut-down rec center, having never fulfilled their cinematic dreams, can make it happen — in glorious 35mm, of course, since money is no object, with Michiko and Sasaki playing the lead roles.

Hirata decides to make the most of the elements at hand, so he films Taizo and his crew going to all-out war against a rival clan, one led by an ambitious gangster who’s been obsessed with Michiko ever since the little girl met him while he was bleeding out in her parents’ apartment.

This description merely scratches the surface of the many characters, situations, and complications at play here, and while it takes more than two hours to pack them all in, “Why Don’t You Play in Hell?” never drags. That’s no surprise, given that Sono’s cult classic “Love Exposure” runs nearly four hours and zips by the viewer in a burst of pure exhilaration.

Films about the moviemaking process can be too precious or too cynical, but Sono nails both the love and the exasperation that can go into the enterprise. Hardened yakuza thugs suddenly become very exacting about sound recording, Hirata demands do-overs even when he’s filming people who are actually slaughtering each other, and the camera crew brings a whole new meaning to the word “shooting.”

There’s more than just mayhem afoot here, however; we genuinely care about Hirata and his friends getting to fulfill their cinematic ambitions, and we believe that Michiko and her silly toothpaste jingle could entrance various generations of TV-watchers. It’s a gift of Sono’s to ground his over-the-top storylines with relatable characters; if they take it all seriously, then so must we.

Like so many memorable yet hard-to-describe movies, “Why Don’t You Play in Hell?” takes a ridiculous concept and commits to it fully. You might laugh with surprise or shriek in horror — both, most likely — but you certainly won’t dismiss it.