With only a few days left in the summer of 2016, Drake‘s chart-topping “One Dance” seems destined to win the race for the Song of the Summer title, but does it really deserve it?

“One Dance” is undoubtedly the most popular new tune of the last few months, but the “Song of the Summer” title calls to mind a song that will be remembered for its absolute cultural domination and singular inescapability. That’s a bar “One Dance” can’t clear.

The success of “One Dance” is undeniable — the second single from Drake‘s album “VIEWS” topped the Billboard Hot 100 for 10 nonconsecutive weeks this summer — but it’s not hard to see that it hasn’t achieved the same level of cultural permeation as some of the hits of summers past.

According to Nielsen, “One Dance” has been downloaded about 200,000 times per week in the period between Memorial Day through the end of July (with 150 on-demand audio streams counting as one download), for a total of 1.6 million downloads.

Comparatively, Carly Rae Jepsen’s 2012 Song of the Summer “Call Me Maybe” had reached the 2 million mark by the same point in the summer, and Robin Thicke‘s controversial but massive “Blurred Lines” had surpassed 3 million in 2013.

For all its success, some commentators suggest that “One Dance” may not be pop enough to reach the broadest possible audience. “It’s maybe a little bit more narrow,” David Bakula, Nielsen’s SVP of Analytics, told TheWrap. “I don’t know that it has that huge, multi-format crossover that some of those other songs did.”

Indeed, while Drake‘s tune has dominated on audio streaming services like Apple Music and Spotify, it has fared less well in other formats.

In the 2016 Mid-Year Music Report released last month, Nielsen noted that “One Dance” was easily the year’s most-streamed song by the end of June with more than 286 million plays — nearly 40 million more than the runner up — despite the fact that it had only been out since April.

In terms of pure sales, though, it clocked in at just No. 6 for the year so far, behind Rihanna‘s early-in-the-year single “Work” (coincidentally also featuring Drake) and some leftover 2015 releases, including Justin Bieber‘s “Love Yourself” and Flo Rida’s “My House.”

That “One Dance” could even come close to matching the sales of songs released months earlier is impressive, but the fact that it blew those same songs out of the water in streaming numbers makes its sales performance seem like a disappointment by comparison. 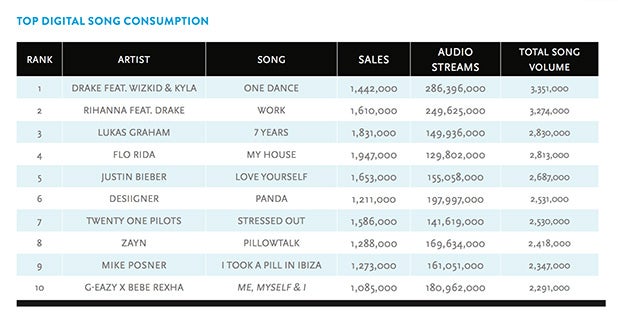 “One Dance” isn’t a clear winner on radio, either. Even though it had a comfortable run at the top of the Hot 100, “One Dance” has had more trouble fending off Justin Timberlake‘s “Can’t Stop the Feeling” on Billboard’s Radio Songs chart throughout the same period. Comparing radio play, Timberlake’s “Trolls” soundtrack cut came out on top for five nonconsecutive weeks in June and July.

And the bar has been raised in recent years. It takes more than big sales — or audio streams — for a song to truly feel like an all-around hit.

Also Read: Drake Is Spotify's Most Streamed Artist of 2015

For instance, “One Dance” still doesn’t have a music video to back it (Drake reportedly shot one in South Africa a few months back, but it hasn’t yet been released at time of publication). That oversight could be a major factor in the song’s limited success, especially since Drake‘s video for “Hotline Bling” was a major factor in his last bid for cultural domination.

That meme-worthy clip resulted in both a “Saturday Night Live” parody starring Donald Trump and a T-Mobile commercial that premiered during the Super Bowl. Not to mention the endless parade of GIFs online.

“Hotline Bling” felt more inescapable than “One Dance” does, even though it famously never reached No. 1. (Almost certainly due to the technicality that Apple Music, where the video first premiered exclusively, does not report video streaming numbers to Nielsen, and thus does not factor into Billboard’s calculations).

In order to capture the public’s full and complete attention in 2016, a song has to do so on every platform available, including YouTube, social media and streaming services.

“If a song is going to reach that pinnacle of success, it’s got to be everywhere,” Bakula said.

Bakula points to “Hello,” Adele’s long-awaited comeback single from last fall, as a better example of Song of the Summer-levels of success. the British star’s ballad ruled the charts for weeks in late 2015 thanks to quotable lyrics, a stylized Xavier Dolan-directed video and the singer’s universal appeal.

Most importantly, it got people talking. It was so recognizable that, like”Hotline Bling,” it was parodied again and again, by everyone from “SNL” to The Muppets.

Music fans, like fans of any media, have more options than ever when it comes to how they consume and engage with music, and Bakula says that means when something hits across the board it’s going to be huge.

From Tears for Fears’ ”Shout“ to Drake’s ”One Dance,“ every summer’s biggest hit, according to Billboard