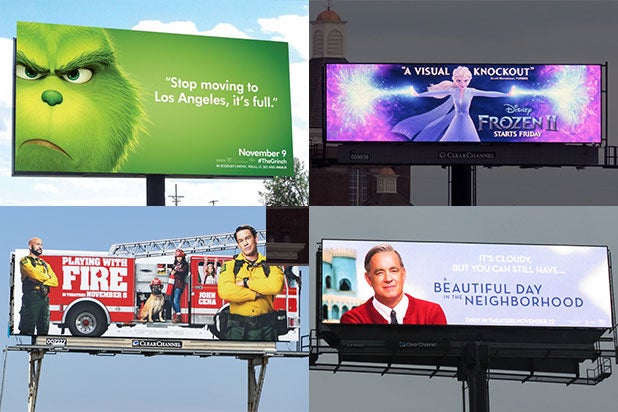 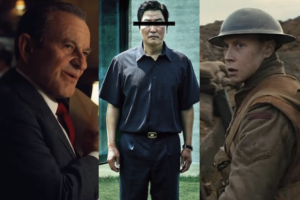 10 Things I’m Thankful for This Oscar Season, From a Shorter Timetable to Joe Pesci

Drive along Sunset Blvd. in Los Angeles, and you’ll see one colorful billboard after another marketing the new blockbuster Disney movie or the next season of Netflix’s upcoming show “The Witcher.” Studio executives and billboard companies don’t think that will change anytime soon despite the rise of targeted digital advertising.

In fact, the aggressive marketing push by Netflix — which has locked down two dozen billboards on the Sunset Strip from Regency Outdoor Advertising in a deal the L.A. Times estimated to be worth tens of millions of dollars — has driven up the price of key billboard locations as much as 20% to 35% in recent years.

And the major outdoor advertising companies are cashing in. Clear Channel Outdoor this month reported $928.1 million in revenue in the Americas for the first three quarters of 2019, an 8% increase year over year. Rival Outfront Media reported revenue of nearly $1.3 billion for the first nine months of 2019, an 12.2% increase over 2018. It’s clear: Billboard marketing is still lucrative.

Studios and network executives say that even in an era of targeted online advertising, old-fashioned billboards continue to play a key role in their promotional plans.

Dana Nussbaum, EVP of Media at Warner Bros., told TheWrap: “Over the past two years, the outdoor market has evolved tremendously — we’ve seen an influx of advertisers that previously had been out of the market.”

According to multiple insiders, there are several reasons for outdoor advertising’s continued growth — starting with cost and effectiveness. Even though increased demand by Netflix (and other players) have hiked up the prices, billboards remain a cost-effective way to reach talent, studio and network executives, and fans.

“Both our printed and digital billboards have proven increasingly valuable to our studio advertising partners, especially in a time where the media landscape remains in a constant state of disruption,” Clear Channel’s Chief Revenue Officer Bob McCuin told TheWrap. “Our medium continues to perform as a highly effective way for marketers to reach audiences at scale, with pricing that is significantly lower than television or other traditional mediums.” 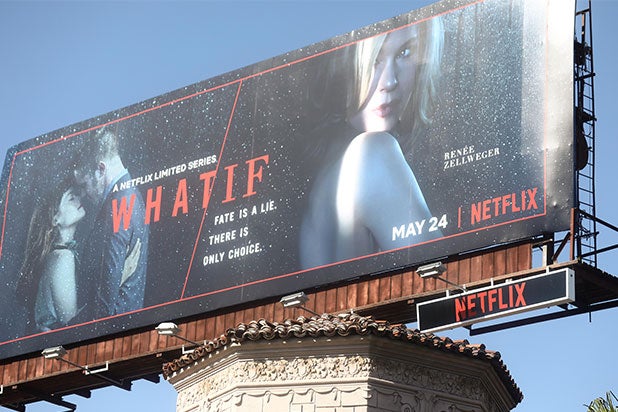 A second advantage for outdoor ads is how shareable they can be in the social media age.

“Canvases are infinitely shareable — the talent, and the studios, and the fans take photographs of these billboards or of themselves standing in front of the billboards and they share it on social media,” Jodi Senese, the chief marketing officer of Outfront Media, said. “That ensures built-in amplification of the billboard itself through the impressions generated through social channels.”

Senese said the billboard game change in 2010 thanks to improvements in iPhone’s camera and the launch of Instagram. “That has changed the trajectory of our business: Nearly every consumer is armed with a camera built in to their phones, and connectivity and social channels with which to share it,” Senese said. “This is a huge opportunity for the OOH [out of home] sector.”

Yes, social media plays a huge role in brand awareness, but billboards also have increased in scale and creativity to lure in views. “The only thing that’s changed is the pressure for ads to stand out, and that’s a challenge studios have witnessed,” Outfront EVP Dana Wells said.

Senese added, “To break through the clutter and garner attention outside the small screen of two-inch phones, the juxtaposition is to have real life big canvases, the physicality of it has become so important.”

For example, Fox advertised “The Greatest Showman” in 2017 by placing two billboards on either side of the street on Overland drive in Culver City, and connecting the two by having stars Zac Efron and Zendaya reach out for each other over the street. According to Senese, that method is called “gating,” where you turn one billboard into an ongoing storyboard.

A senior marketer at a major Hollywood studio told TheWrap: “Outdoor is a great way to complement an A/V and digital campaign, it’s great for building awareness for large event films, and it’s very effective for kids.” 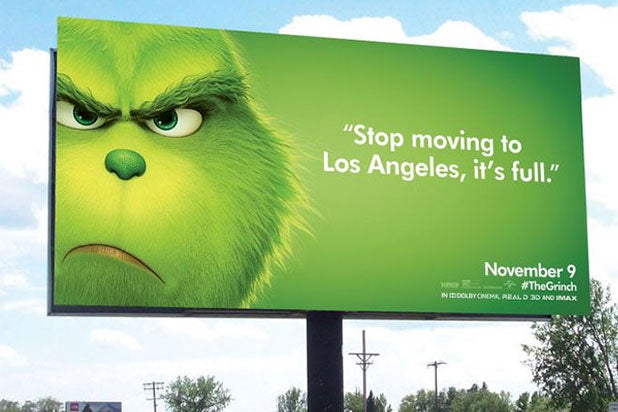 For “Fantastic Beasts and Where to Find Them,” Warner Bros. created a billboard where it looked like poster was crashing in on the street below it, all to draw in the eye of the consumer. Billboards for “The Grinch” mocked the local residents by calling out the cities by name. For instance, one read, “Stop moving to Los Angeles. It’s full,” while one in New York read, “Rude. Loud. Angry. New Yorkers are my kinda people.”

More and more billboards transcend the traditional rectangular shape. Often times, heads will roll over (in the case of the “Jumanji” billboard), or a poster will give the illusion that the two actors are sitting on top of it (like with “Shazam!”)

Bus shelter posters also are becoming and more popular and allow for creative executions. For example, for the release of “Annabelle: Creation” in 2017, Warner Bros. used the billboard space to visually create a lockbox for the infamous Annabelle doll. 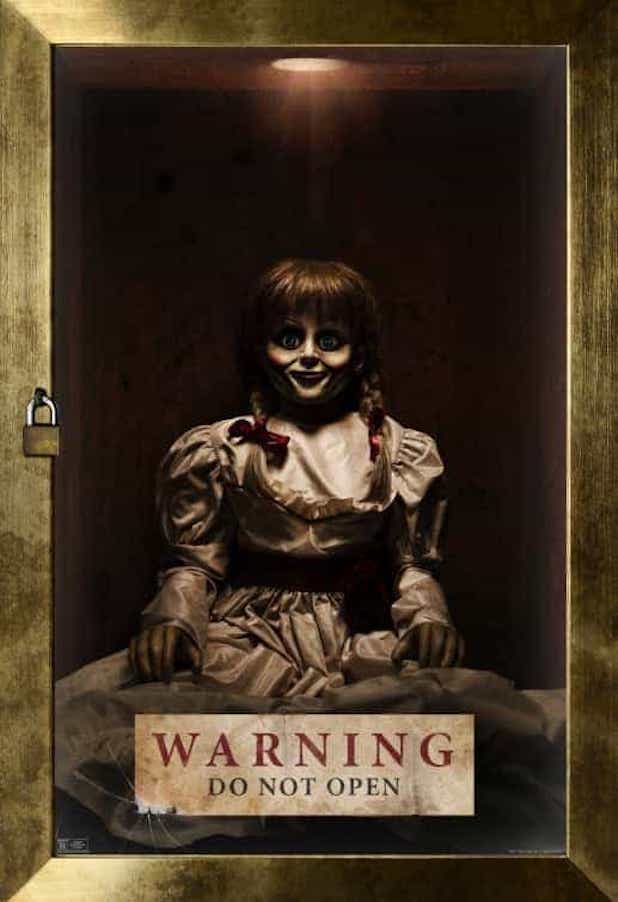 “What studios need to do is create mass awareness for their releases and that is best achieved in OOH  — where they can reach large segments of the population, and can also talk to the trades and the talent,” Senese said.

McCuin added, “Studios, like other advertisers, now understand the impact that OOH exposure has on driving not just broad awareness but also on specific business outcomes. And at a time when it’s increasingly difficult to aggregate audiences at scale, advertisers can now understand Out of Home’s impact.”

A lot of times, studios will develop “dominations” where they have a monopoly on either a billboard or a certain area. Disney, for example, commands the biggest ad space along the Strip, along the side of the 8560 Sunset Blvd. building. One insider told TheWrap that the studio has had a 10-year lease on the space, which is not uncommon for billboards in prime locations like the Sunset Strip (a spokesperson for Disney did not respond to TheWrap’s request for comment).

While many billboards are still rented out monthly on a la carte basis, McCuin said many studios and other brands will lease key locations for a year or more “so they have ownership and flexibility to leverage that specific asset and location among a number of their tentpole campaigns.”

And as with all things involving real estate, location matters significantly. “Certain areas of L.A., such as Hollywood and North Hollywood, remain among the most coveted locations by many advertisers,” Clear Channel’s Chief Revenue Officer Bob McCuin said told TheWrap.

“When selecting locations for outdoor advertising, we think about the consumer: Where are are they going, where are they congregating and where are they really spending their time? We often have significant presence at lifestyle destinations like Hollywood and Highland, have had long-term presence on Sunset and other similarly high-traffic areas and have advertised our films at The Grove since the day The Grove was built,” Nussbaum said. “We want our campaigns to be a part of people’s everyday routines and everyday life, so we go to them.”

Standard billboards are relatively inexpensive to produce — one insider said a standard 672-square-foot billboard costs between $750 and $1,000. But for more elaborate designs can run much, much higher. McCuin noted that some billboards “range into the tens or even hundreds of thousands of additional dollars for production and installation, depending upon the number of assets and complexity of the build.”

Another bonus for eco-conscious Hollywood: The standard vinyl billboard is recyclable and typically biodegradable. Plus, the recent move to digital billboards may further reduce outdoor advertising’s carbon footprint.

“We now have a very large digital deployment in transit systems,” Senese said. “When you think about the digital ecosystem, the computer and the mobile phone have been beneficial. People are spending 70% of their time out of their homes, and 100% of the time they have a device in their hands. What they do with that device is very fluid.”

From ”It Follows“ to ”The Babadook,“ these horror gems didn’t have blockbuster budgets 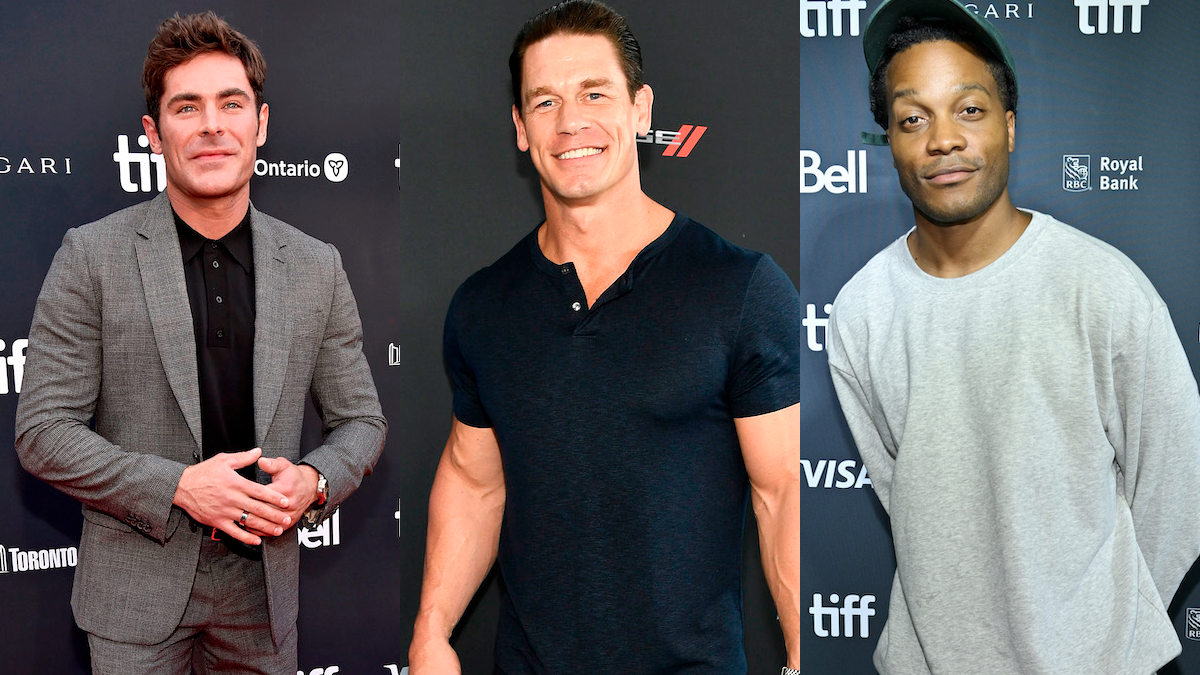