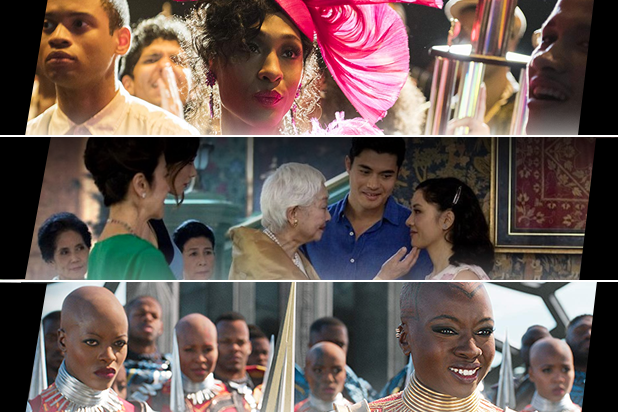 It has been more than a year since the ”inclusion rider“ became the talk of the industry. What happened?

When Frances McDormand emphatically spoke of “inclusion riders” at the end of her 2018 Oscars speech, the ensuing publicity and support seemed poised to usher in a new era of inclusion in Hollywood.

But the hiring clause has not been widely embraced in Hollywood for the same reason the inclusion rider was created in the first place: an overwhelming lack of accountability and a deflection of responsibility among deal-makers in the industry.

The legal clause allows high-profile talent to pressure studios to equitably hire a diverse cast and crew on film, TV and other projects. While showrunners like Ava DuVernay, Ryan Murphy and Lisa Hanawalt have supported underrepresented talent in recent projects like “Queen Sugar,” “Pose” and “Tuca and Bertie,” the rider that made the rounds on social media following the Oscars puts that kind of work into writing to hold studios legally accountable.

Director Paul Feig, who declined to be interviewed, announced on Twitter that he adopted a version of the rider for his production company in March 2018. The actor and producer Michael B. Jordan’s  upcoming “Just Mercy” is the first film his production company made with Warner Bros. under a new studio-wide inclusion policy that pledges to use “best efforts to ensure that diverse actors and crew members are considered for film, television and other projects, and to work with directors and producers who also seek to promote greater diversity and inclusion in our industry.” (Jordan declined to comment.)

But aside from a few prominent examples like these, only a handful of productions or executives have acknowledged using a rider since McDormand’s speech. And the confidentiality of studio contracts inherently has made it difficult to accurately track the rider’s actual usage.

A prominent casting director estimated hearing about the use of riders on eight different productions over the last year, while a veteran producer said she’d only heard of the rider used on fewer than three films.

Kalpana Kotagal, an attorney and co-author of the rider, said she has worked with several clients who have used the clause in their contracts but she could not offer a specific number.

And Bonnie Eskenazi, a leading entertainment lawyer in Century City, said her firm’s clients have never once used the rider.

Also Read: 7 Hollywood Stars to Add Inclusion Riders to Their Projects, From Michael B. Jordan to Brie Larson (Photos)

What’s key about WarnerMedia’s inclusion pledge is the phrase “best efforts,” which echoes the “reasonable efforts” language in the inclusion rider template that made the rounds after McDormand’s Oscar speech. There is a legal standard attached to these phrases, though the determination of whether a company did indeed engage in “best” or “reasonable efforts” is subjective and would be determined by the courts.

A Warner Bros. executive, who requested anonymity to speak candidly about the company’s new inclusion policy, said that WarnerMedia is in the midst of compiling an interim report detailing the ethnicity and gender breakdown of the company’s permanent employees. Though that report, which will be released in the coming weeks, will only include limited data, the executive said that the studio hopes to release a more complete report in 2020 that will serve as a baseline for assessing its inclusive hiring progress.

But the bigger issue that executives have been facing since the policy was announced is how to accurately collect information about employees — voluntarily and anonymously — on other key markers of representation, such as a person’s sexuality, physical ability or veteran status.

“I don’t think we realized quite how complicated (implementing the policy would be) — not that we wouldn’t have gone to do it, we still would have done it,” the executive said. “But as you get into it and the layers and layers of questions and things that you have to create, and then the decisions that you have to make about, you know, how do you really get at the heart of this? It’s been interesting.”

“It’s just hard,” the executive added. “And that’s not even an excuse. It’s just a fact.”

Still, it’s notable that WarnerMedia’s inclusion policy, despite its broadness, contains the commitment to an annual report and language targeting film, TV and the actors and crew it employs in front of and behind the camera, in comparison to the broader diversity and inclusion commitments of other major Hollywood studios. However, it remains to be seen whether the policy will ultimately create more inclusive representation across the board.

So how do the numbers stack up industry-wide? An analysis by USC Annenberg’s Inclusion Initiative of 100 of the top films in 2018 had an unprecedented 40% of films with female leads, while 28% showcased actors of color — numbers that were undoubtedly boosted by box office successes hits like “Black Panther” and “Crazy Rich Asians.” This is certainly progress from 2017, where less than 34% of the top 100 film had women in the lead or co-lead position, and 21% were led by actors of color. But looking more broadly across the last 12 years of popular films, the Inclusion Initiative’s analysis found that women were cast in lead roles for 28% of top films, while actors of color made up 15.5% of lead roles within a sample of 1,200 films.

To close those gaps, producers and executives hope tools like the inclusion rider can ensure that not just a select few films — or a select few filmmakers — are actively interviewing, auditioning and hiring underrepresented talent with pressure in the form of a financial commitment.

But at the end of the day, industry veterans interviewed by The Wrap said that few gatekeepers in Hollywood — the majority of whom remain white and male — are willing to subject themselves to that kind of accountability.

The studios “already are worried: Are they really going to get (the project) to a script stage? Do we really think that we can do all the development of this? How much is it going to cost? What were the underlying rights?” said one veteran producer and industry executive, who requested anonymity to speak candidly. “If we get to a place (where) we’re making this show … and we don’t hire 50/50 (women and men)? Let’s say we do 49/51. We are in breach of a legal contract. And the bottom line is, nobody wants to do that.”

For Kotagal, that kind of recalcitrance is “unsurprising.”

“If I put out a template that included no measures for reporting and no process for accountability, then I would be not staying true to what I know is needed to accomplish change in an industry,” Kotagal said. “Did I suspect that studios would balk at that? Of course. How unsurprising is it that an industry that hasn’t wanted to change is going to balk at efforts to hold it accountable?”

Even for high-profile stars who want to use the rider, convincing a studio — which often holds the purse strings — can prove difficult.

Fanshen Cox DiGiovanni, an executive at Matt Damon and Ben Affleck’s Pearl Street Films and a co-author of the rider, said that when the two actors approached one studio about using the rider on a project, they were essentially told by the studio, “This is important to us, but we’ve already got our own kind of parameters in place for it, so we’re going to go ahead and use ours.”

As for how those “parameters” will be implemented on the project? DiGiovanni doesn’t know. “I will probably see them when you do, which is when they come out of the theater,” DiGiovanni said.

Russell Boast, the president of the Casting Society of America and the head of its inclusion and diversity committee, told The Wrap that the industry often deflects responsibility when it comes to sensitive issues like race and gender.

“What got me motivated to get into this world was watching the blame game, as I like to call it, being passed around. ‘No, it’s the writers; no, it’s the producers; no, it’s the casting directors; no, it’s the showrunners; no, the studios aren’t doing their jobs,'” he said. “I was so tired of hearing that it was everyone else’s responsibility.”

Though final casting decisions usually defer to the showrunners, directors or producers, Boast said that people in his role have a “unique position” and can do more to advocate for actors from underrepresented groups.

“We’re not coming to the studio and saying, ‘You should do this,’ or ‘This is a good idea,’ or ‘Sign this,'” he said. “We’re in the room with the showrunner, the creator, the director; we have relationships. They trust our taste. They trust our creative vision. They trust that we’ll bring in terrific actors and the right actors for the role. And, historically, we’ve been the ones to say, ‘Wait a minute, I’ve got a different idea.'”

Those internal pushes, he said, seem to create a “safe zone” for productions to take more risks to boost a film or show’s diversity.

Eskenazi, the entertainment lawyer, said that major studios — who have the financial power during contract negotiations — don’t have much incentive to sign onto legally binding contracts. But outside financiers can take a stronger stance on inclusive hiring when it comes to the projects they support.

Outside of the rider, a number of other tools have emerged to challenge Hollywood’s resistance to changing its hiring practices.

In addition to WarnerMedia’s policy, Women in Film and the Sundance Institute’s ReFrame Stamp initiative tries another approach: positive reinforcement. Films that have hired “female-identifying people in four out of eight key areas of their production, including: writer, director, producer, lead, co-lead, speaking parts, department heads and crew,” receive a stamp acknowledging as such. Consumers could, in theory, use those markers accordingly to be more selective of the films they choose to support. (Past recipients include Olivia Wilde’s “Booksmart,” Jon M. Chu’s “Crazy Rich Asians,” Steve McQueen’s “Widows” and Paul Feig’s “A Simple Favor,” among others.)

Cathy Schulman, the president and CEO of Welle Entertainment and outgoing WIF president, said that making industry-wide changes means having to play by industry rules. “What drives industry decision making is, ‘What is the audience going to purchase?'” said Schulman, whose credits include “Five Feet Apart” and “The Edge of Seventeen.” “Where you do the work is you start to educate the industry on its own audience.”

In movies alone, a recent study found that women made up more than half of the moviegoers in 2018, and that buyers who identified as Latinx accounted for 23% of tickets sold — higher than the group’s 18% representation in the U.S. population. Women in the U.S. also drive the majority — close to 73 percent — of consumer spending, according to a 2009 paper published in the Harvard Business Review.

Still, Schulman said, the “old thinking” of creating content for men and boys remains pervasive across the industry. Just look to the onslaught of superhero and science fiction movies that have dominated the box office in the past decade, she said.

According to a 10-year investigation by the Women’s Media Center and BBC America, 88% of those films were directed, produced, written and edited by men, and 86% were driven by a male lead character. “These films have been mostly by, about, and for men or boys,” the report concluded.

Ultimately, the issue of inclusivity both on camera and behind the scenes comes down to how willing Hollywood is to be self-critical of its practices and do the work of changing old, pernicious habits. “Industries that aren’t held accountable when they do a bad job keep doing the bad job,” Kotagal said. “That should come as no surprise to anybody, and Hollywood is not unique or special in that regard.”