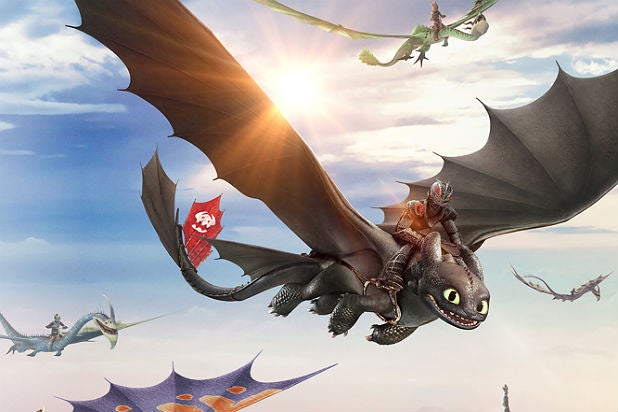 “Do you want to ride a dragon?” … That’s the question the Dreamscape Immersive creative team asked themselves when brainstorming ideas for VR experience based on the “How to Train Your Dragon” film franchise. And the resounding answer was “Yes!”

“It was both a business opportunity with Universal, but also you have to identify what about an idea makes it uniquely suited to Dreamscape,” co-founder and chairman Walter Parkes told TheWrap. “Since we were interested in flying, we were excited about rendering our players as animated characters in a beautiful CG world as opposed to trying to mimic the real world.”

Thus, the “DreamWorks Dragons Flight Academy” was hatched and the inaugural flight took to the air last week at Dreamscape’s flagship location in Westfield Century City in Los Angeles.

Recreating the magical world from the “How to Train Your Dragon” trilogy of movies, the experience allows riders to hop on their own dragon (which looks suspiciously like a spin bike to the naked eye!) and go on a daring mission to rescue stolen eggs from poachers.

Inspired by DreamWorks Animation’s critically acclaimed ‘How to Train Your Dragon’ film trilogy, a class of up to eight rookie riders at a time is enlisted in the world’s first dragons flight academy led by famed dragon riders, Hiccup and Astrid, and their loyal dragons, Toothless and Stormfly, as they embark on a swooping, swerving free-flying rescue mission to the Hidden World.

The adventure kicks off at Berk, a village featured in the films that teeters high on the cliff tops of a rugged North Sea island, and is home to fierce Vikings and every known species of dragon. In Berk, Dragons and Vikings live together in playful harmony, but poachers pose a constant threat. After mastering their dragon riding skills, the eight rookie riders must band together to complete a perilous rescue mission in the Hidden World, dodging flaming arrows and collapsing ice caverns along the way. In order to earn their dragon wings and become true heroes, the rookie riders must escape as a team unscathed, showing the value of collaboration and teamwork.

While the first three Dreamscape experiences launched followed original storylines and characters, “this was the first time we’ve worked with existing IP,” Parkes said. “We were very excited to explore a new technique, which we call ‘free-flying’ as opposed to free-roaming. It presented challenges in terms of telling stories, but once we broke through that it became a very exciting option. We’ve now sort of committed to flying as one part of our ongoing Dreamscape slate,” he added.

Riders use their body movements to control their dragon with the aid of mechanized simulators so they are able to control their course even though the outcome of the adventure is pre-determined.

“We use a ‘rubber-banding’ technique, which is a typical thing used in racing video games so that if one person is really good and the other person isn’t, you get to keep them together,” Bruce Vaughn, Dreamscape CEO and former head of Disney Imagineering, said. “We actually vary it throughout the experience. Some of it is just done by environment — so the caves keep you corralled together — but in other parts, like when you go through the hoops, you have a lot of control.”

In movies, there are fundamental tools you use when you tell stories, explains Parkes, who has produced over 50 films, including the “Men in Black” series and “Minority Report.”

“One is the frame and the other is editing, where you can order an experience accordingly,” he said. “We don’t have that in a VR experience, but we do have other things like sound effects so we try to structure it so there are certain moments that feel like an expression of cinema, with the music and sound effects supporting that drama.

“The emotional response after you survive in some way differentiates what we do … bringing that deep, emotional satisfaction that you feel from good movies into this space. At times that requires us to gather our forces together so people are really experiencing something together,” he added.

The “Men in Black” VR experience was announced in June, but other Dreamscape movie tie-ins are being carefully kept under wraps. However, Vaughn teased: “Flying is a huge part of films we’re looking at.”

Dreamscape Immersive is a location-based VR studio and retailer backed by some of Hollywood’s most successful studios and talent, including 21st Century Fox, WarnerMedia, Viacom, Steven Spielberg and Hans Zimmer. It combines the emotional power of Hollywood storytelling, the visceral excitement of great theme-park rides, and proprietary full-body tracking technology to create free-flying and free-roaming experiences that push the limits of virtual reality.

Tickets for all of the current adventures are available at dreamscapeimmersive.com.