The new ABC series “Quantico” features not one timeline but two, running parallel to one another. In one, central character Alex Parrish, played by Priyanka Chopra, is in training at the FBI Academy. In the other, she’s waking up in the aftermath of a terrorist bombing in New York City. If the scene immediately calls to mind the terrorist attacks of Sept. 11, 2001, with rubble, flames and sirens shutting down the streets of the biggest city in the country, executive producer Joshua Safran says that’s intentional.

The producer of “Smash” and “Gossip Girl” was in New York City when two hijacked planes crashed into the World Trade Center buildings in the deadliest act of terrorism on U.S. soil. “9/11 was so impactful to me,” Safran said. “I’ve never really let go of it. You didn’t even have to be in New York to have that kind of reaction. People are obviously still grappling with it and moving through it and talking about it. [‘Quantico’] was a way to sort of dissect that.”

But in the casting, he admitted, his conception of the central character changed completely. While Alex Parrish was original envisioned as jaded and brooding, Safran was forced to reconsider when the 33-year-old Indian actress Chopra came in to read for the role.

“When she walked in, I was very confused because she walked in with all of this Priyanka-ness,” Safran said. “I was like, ‘This person feels like a star–how come no one has found her?'”

In fact, audiences overseas had found her, even if Safran had not. Chopra is one of the highest-paid actresses in Bollywood, having starred in dozens of films including “What’s Your Raashee?,” “Barfi!” and the superhero series “Krrish.” At the time she was cast on “Quantico,” Chopra was under a talent holding deal with ABC, guaranteeing that she would be cast in one of the network’s new projects for the fall TV season. 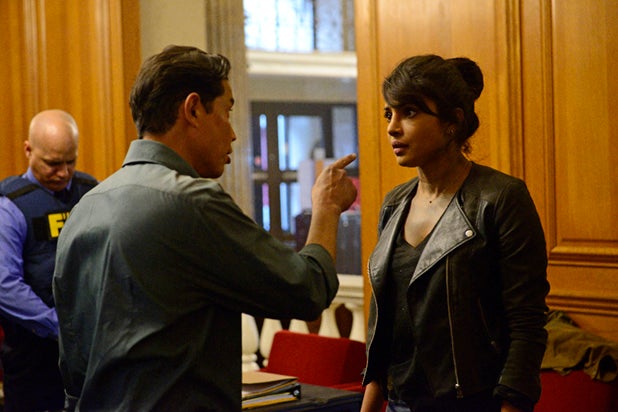 But all of this was unknown to Safran, who simply saw that Chopra “came in to read and she was amazing.” So much so, he added, that he immediately saw that it would be a mistake to focus solely on the character’s dark side. “Priyanka came in and played all of that but as a character who was always in control,” he said. “And still warm and vibrant because she knew no one was going to get through her walls. I had never imagined the positive side of that character. From that point on, Alex was the kind of character who can have humor, who can have heart.”

At first blush, “Quantico” has a lot in common with the many ABC series from prolific producer Shonda Rhimes: It’s a soapy but topical primetime drama with a diverse ensemble cast led by a central female figure. Safran is a fan of Rhimes, who currently has a monopoly on the network’s Thursday night line-up as creator of “Scandal” and “Grey’s Anatomy” and executive producer of “How to Get Away With Murder.” And while he embraces the comparisons, he also points out that many of the Shonda-esque elements in “Quantico” also existed in his previous shows, including “Gossip Girl” and “Smash.”

In fact, “Quantico” draws structurally from another source of inspiration entirely: “Buffy the Vampire Slayer,” with its self-contained arcs from season to season. Admitted Safran, “I’m always kind of chasing after the ‘Buffy’ model.”