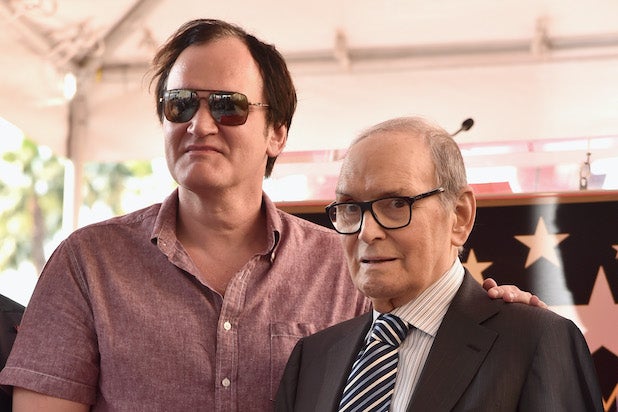 Quentin Tarantino had never used an original score for any of his films before “The Hateful Eight,” but it was the late Ennio Morricone who finally made him “break down” and entrust the process to the musical master.

Tarantino had admired Morricone, who died at 91 on Monday, for decades and had used preexisting Morricone music on “Inglourious Basterds,” “Django Unchained” and “Kill Bill Volume 1” and “Volume 2.” But Tarantino is better known for picking and choosing different songs or film score snippets to dictate exactly the tone he’s going for, and he had never turned over the full creative process for a score to another composer.

That changed on “The Hateful Eight” after he had an instinct that this film in particular deserved an original composition.

“I finally broke down. And it was the maestro that made me break down,” Tarantino told TheWrap’s Steve Pond back in 2015 upon the release of “The Hateful Eight.” “I didn’t know if it was going to work out, but I felt I owed it to myself and I owed it to him to investigate it. To explore that idea. Only to find out that he felt the same way – he wasn’t sure if it was necessarily the right thing.”

Part of the skepticism came from the fact that Morricone in 2013 once told a class of students that he never expected to work with Tarantino again, saying that he “places music in his film without coherence” and that “you can’t do anything with someone like that.”

Tarantino told Pond in 2015 that some of those quotes were taken out of context, and that ultimately, Morricone simply didn’t much care for “Django Unchained.”

But Tarantino said that he translated the “Hateful Eight” script into Italian and learned that both Morricone and his wife loved it, and the two then met together with a translator in his apartment in Rome to discuss why this movie warranted an original score.

“We start talking, and he goes, ‘Well, I’m kind of wondering what you’re thinking, why you’re even here. Because hiring a composer to compose an original score is not necessarily what you do. You take a collection of scores from other movies, cut them in as you see fit, and you do a pretty good job of that, and people seem to like it. So why would you want to change,?” Tarantino told Pond, adding that he wasn’t sure he wanted to change but said that Morricone was his favorite composer ever.

“What makes this one different from the other ones is that I have a little whispering voice in my ear that says this material, in particular, deserves to have an original score,” Tarantino responded. “And I’ve never had that voice in my ear before. This is the one time I have it. And so I thought we would explore it.”

Morricone didn’t think he would have time to work on the project, but he did have an idea for what the film’s main theme could be.

“And before he told me ‘I can’t do it,’ I said, ‘Let’s go back to that theme you heard in your head. What is that? I’m curious about that.’ And he goes — he was referring to the main theme that I use in the opening credits — he said, “Well, I see it as a driving theme that would suggest the stagecoach’s forward momentum. So it would drive and drive and move things forward, but it would also suggest the impending violence that would follow in the piece eventually,” Tarantino recalled. “Well, that sounded pretty great. So then for a while, we talked about just doing that theme. So then he sat down to write that theme, but he got inspired and 10 minutes of music became 30 minutes of music, and one theme became four pieces of original music, and working with an editor that became 12 pieces of original music. And I think it’s magnificent in the film and gives it a wonderful quality.”

Tarantino told Pond that ultimately he felt the original music gave “The Hateful Eight” a “special personality.” And it was a good intuition too; Morricone won his first competitive Oscar for the film after a career in which he had composed music for over 500 films. (He had received an Honorary Oscar in 2007.)

In fact, Tarantino revealed in a separate interview with Christopher Nolan also from 2015 that some of the music in Morricone’s score came from unused orchestral and synthesizer arrangements that Morricone wrote for John Carpenter’s “The Thing” back in the ’80s, the kernels of which expanded into the wholly original score.

Tarantino’s admiration for Morricone and the film’s he’s scored, especially the Sergio Leone spaghetti westerns that “Django Unchained” and “The Hateful Eight” are inspired by, is well documented. But when Tarantino was on hand for Morricone’s Walk of Fame ceremony, he said that ahead of the occasion, he discovered that among his entire vinyl collection, he had more albums from Morricone than from any other artist.

You can check out that speech from Tarantino here.

Where does “Once Upon a Time in … Hollywood” fall among the grindhouse auteur’s films?