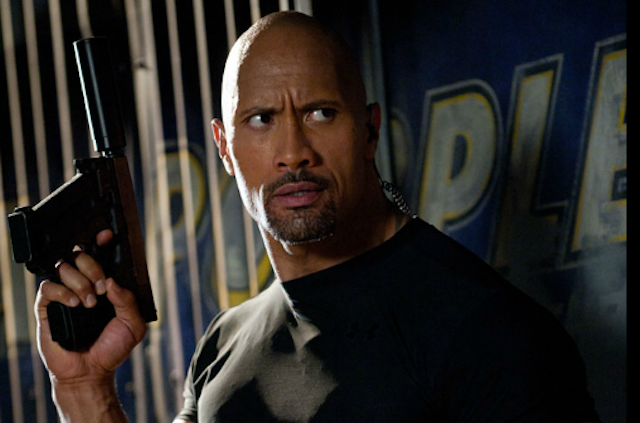 Ask a group of pro wrestling fans to name their favorite lord of the ring and you might get 10 different answers.

Yet ask those same people to pick their favorite wrestler-turned-movie star and the decision gets a whole lot easier.

There's only one choice.

Dwayne Johnson, better known as The Rock, has starred in three movies over the past three months, "Snitch," "G.I Joe: Retaliation" and "Pain & Gain," and each film was the top new release at the box office its opening weekend. His next movie, "Fast & Furious 6," will have to face down "The Hangover Part III" and "Epic" to keep that streak alive, but no one questions whether it will be a hit. Every film in the franchise has been, and early projections suggest the only question is whether it will hit $500 million, $750 million or $1 billion worldwide.

Johnson is currently in the midst of a streak unheard of not only in the history of former wrestlers but also other athletes who tried to cross over into the film business. Hogan, Cena, Shaq and even O.J. Simpson made a few movies, but none of them became a bona fide movie star. (Note: One sage reader pointed out that we forgot about Olympic swimming gold medallists Johnny Weissmuller and Buster Crabbe, who became "Tarzan" and "Flash Gordon," respectively. How could we forget Weissmuller's yell?)

"Everyone sitting in my chair is trying to work with Dwayne," Jeff Kirschenbaum, co-president of production at Universal, which has released five movies starring Johnson, told TheWrap. "I don't think he’s having a moment. This isn't his 15 seconds of fame. He now has enough experience and craftsmanship that it's going to be a long run."

While this isn't the first time Johnson has been atop the box office, this is his first uninterrupted string of hits. His early films ranged from financially successful ("The Scorpion King," "The Game Plan," "The Tooth Fairy") to disappointing ("Doom," "The Rundown").

"I don't know that no one took him seriously because of wrestling, but he's the only person who has ever truly emerged out of that," an individual close to Johnson, who declined to be identified, told TheWrap.

So how did this happen? How did a former football player and member of the inimitable Rock 'n' Sock Connection became one of the most successful actors working today?

It starts with protein.

"He wakes up at 4 a.m. just so he can eat protein," Kirschenbaum, skinny as the Rock is broad, said. "He goes back to bed for an hour and at 5 a.m. he works out – when most people aren’t even awake. He woke up an hour early just so the protein is already there to build muscle."

Ask anyone who's worked with Johnson why he has succeeded where others have failed and they jump to tell a story about those pre-dawn workouts. It’s what Ric Roman Waugh, who directed Johnson in "Snitch," dubbed the actor’s "sweat equity."

"A lot of people can say 'we worked hard and can stay up late’," Waugh said. "But if they could only understand the amount of stuff he’s putting into one day, it’s astounding. The sky could be falling in his world, but in that moment you need him to focus, he’s 100 percent with you."

That workload has only increased over the past two years. Since resurrecting his wrestling career in 2012, Johnson has expanded his film and TV work. Not only is he starring in several movies this year, but he just produced his first film, "Snitch," and is about to host a competition show on TNT, "The Hero." When he first decided to try his hand at acting, Johnson retired from the WWE at the height of his popularity.  Yet his specific wrestling personality explains why Johnson found his way in Hollywood where the likes of Hogan and Cena did not.

Like most any other wrestler, he can use his hands or a two-by-four to destroy someone. He demonstrated as much in early films like "The Scorpion King," where he played a mercenary, and "Walking Tall," where he played a veteran eager to rid his town of corruption.

Kirschenbaum described those early performances as "raw," and those early characters as two-dimensional. That is where the career path of most former pro wrestlers both started and stopped.

"Most wrestlers have been straight-forward characters or amped up versions of the real individual," Adi Shankar, producer of "The Grey" and an avid wrestling fan, told TheWrap. "Hulk Hogan acted in a bunch of B-movies playing Hulk Hogan."

Instead, Johnson and his representatives experimented from the get-go, taking roles most wrestlers would not want to touch.

He played the straight man next to Sean William Scott in "The Rundown," which also called for him to get dry humped by a gaggle of baboons.

He then played a gay bodyguard in "Be Cool," and later entered the family area with "Tooth Fairy" and "Journey 2." All of his hits in 2013 feature action scenes, but "Snitch" is an adult drama and "Pain & Gain" is as quirky as a Michael Bay movie comes.

"Most action stars out there would never ever break their brand," Waugh, a former stunt man, said. "They would read a script and see a scene where they get beat down and say the guy has to punch me at least 10 times and hit me with a bat 14 times. Dwayne is completely fearless."

Unlike most of his peers, Johnson’s popularity in wrestling was never predicated on physical prowess or intimidation.

"Stone Cold would get over because he’d beat everyone up. Shawn Michaels was one of the greatest wrestlers of all time. Mick Foley would just do crazy stuff," Shankar said. "The Rock got over because he was funny. You take humor out of the Rock and you don’t have anything."

Shankar can remember when he first fell in love with The Rock. The Undertaker, one of the largest, most intimidating wrestlers in the WWE, had just battered and bruised the former football player. At the next event, The Rock came out and challenged him.

"He said 'Undertaker, you think you impress The Rock with your Mickey Mouse tattoos?' He acted like the Undertaker’s goal in life was to come out and impress The Rock," Shankar recalled. "He wasn’t a heavyweight champion at this point – just a guy coming up. The Undertaker had been around for a decade."

He was a showman first and a wrestler second.

"No matter how bad the show was, The Rock could cut a promo and save it," Shankhar said. "He could get on the mic and speak for three minutes and save a bad show."

Some claim the same now applies to poorly received films, with some dubbing Johnson franchise Viagra. Did your last sequel fail? Hire Johnson.

Some, like Waugh, love this term. Yet many chafe against the idea that Johnson saved their movies, believing it disrespectful to the previous success of the franchises he joined.

Whether Viagra or a supporting hand, there is one thing all directors and studio executives can agree on.

"My biggest concern on my next movie is that he’s not in it,"Waugh said.

For the Record: An earlier version of this story stated that "Snitch" opened in the top spot at the box office its opening weekend. It performed the best of any new releases, but grossed less than "Identity Thief."