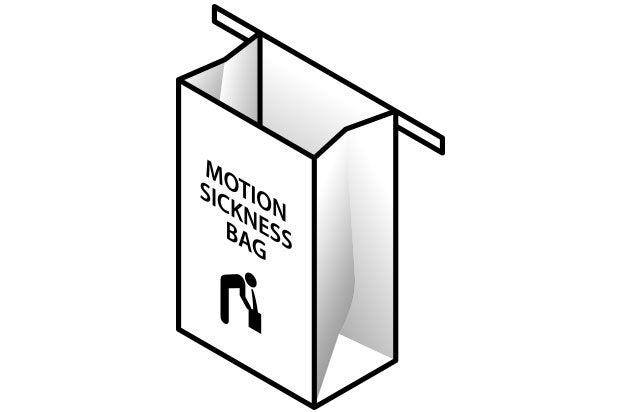 This blog post highlights the dirty secret of virtual reality (VR) — we need to solve its nausea problem. As people learn in business school, it is best to avoid designing products that make customers vomit (tequila being perhaps the only successful product exception to this rule).

As we have highlighted in prior posts, VR is gaining momentum, notably through gaming, sports applications, content promotion and 3D animation. All these applications point to significant financial opportunities, and many observers believe that you can make hundreds of millions of dollars in profit from a working VR ecosystem. VR could even be worth billions, if you believe in the potential of Facebook and its acquisition of Oculus Rift.

Last week, we discussed action gaming as being perhaps the key VR application. Hardcore gamers want this product and will pay real money for it. A game developer looking for paying VR customers and early adopters would be wise to design a fast-paced VR game for the gamers who play “Doom,” “Halo,” “Fallout” and “Grand Theft Auto.”

Unfortunately, most action-oriented VR content has one major flaw. Fast VR action makes many people nauseous, which is a particular issue for intense shooting and combat games. The more you add exciting, fast-paced action to VR, the more you create nausea.

Virtual reality nausea is a real threat to VR taking off. Let’s talk about the causes of VR nausea and what can be done to fix the problem.

In VR games today, the headset tells your eyes that you are moving a certain way, and this differs from what your inner ear is telling you. VR games today creates a mismatch that causes nausea remarkably like seasickness. 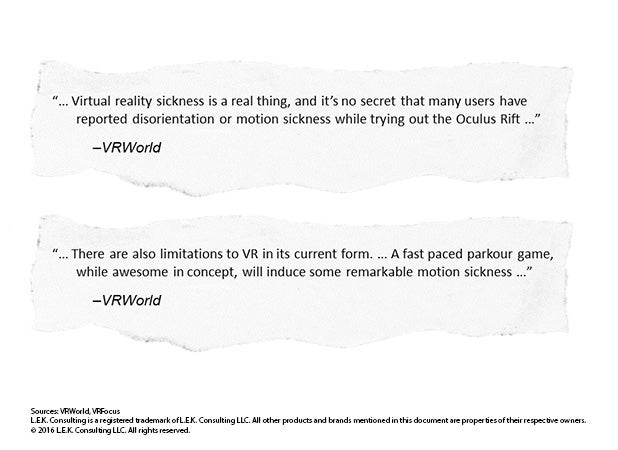 For VR to prosper, there are a variety of technical issues to solve. The technical issues have many names (mismatched motion, field of view, motion parallax, viewing angle, rotational latency, etc.), but all are issues that may defeat the mass adoption of VR action gaming.

The first solution that some have attempted is to simplify the games and slow down the action.

Some developers circumvent VR nausea by limiting the action. For example, you can slow down the pace by creating a game in which the player is only able to swim slowly in a diving suit that limits how fast he or she can move. 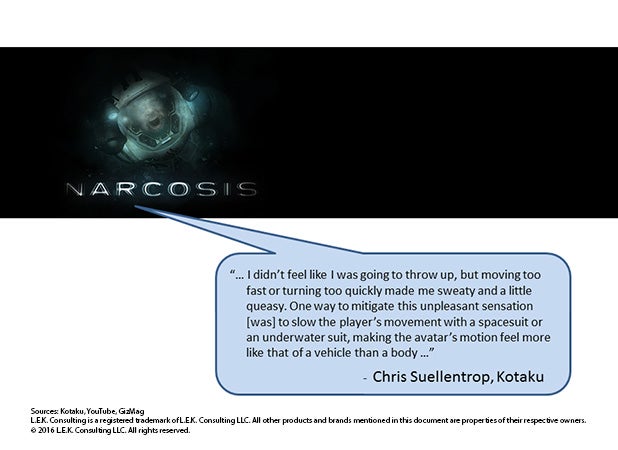 Developers can also decrease the action by avoiding a first-person perspective and providing a bird’s eye view.

Both of these tactics diminish the visceral excitement of a fast-paced, first-person shooter. Getting rid of fast-paced, first-person action is a big problem for hardcore gamers. They are looking for killer VR experiences. They will likely not pay “Grand Theft Auto”/”Fallout”/”Halo” prices or drive “Grand Theft Auto”/”Fallout”/”Halo” volumes for low-action, slow VR content.

Thus, dumbing down VR action will likely not activate the best customer base for gaming companies. We need other solutions.

In our next post, we will explore alternative methods that developers are using to address VR motion sickness.

This is Part 3 in a series on virtual reality trends by Dan Schechter, Gil Moran and Francesco Di Ianni from L.E.K. Consulting’s Media & Entertainment consulting practice.

There are so many ”Star Wars“ games to choose from, but these stand out from the pack