Well maybe this explains why Seth Rogen didn’t get to cameo in “The Avengers.”

Rogen graces the cover of the new issue of GQ (along with his dog Zelda), and the stoner star of “Long Shot,” “Knocked Up,” “This Is the End” and many more talked about some of the frustrations early in his career. He singled out two films in particular: the romantic comedy “You, Me and Dupree,” which is directed by Anthony and Joe Russo, and his superhero starring vehicle “The Green Hornet.”

Rogen said he dreaded doing press for a movie that he himself is not excited to go see, and as a result, he seeks greater creative control on all the projects he’s writing, producing and starring in.

“It’s awkward to promote a movie that you yourself would not be that excited to go see,” Rogen said. “I remember ‘You, Me and Dupree’ was the first time I had to do that, and that movie’s fine, I just didn’t love it. It honestly was not a movie I would have gone out to go see.”

He continued: “It’s OK, the Russo brothers did fine … I actually remember standing in my f—ing closet in my apartment on Hayworth, doing a radio interview, being like, ‘Yeah, go see it, it’s great,’ and being like, ‘Ugh.’ Never again do I want to have to tell people to go see a movie that I myself actually wouldn’t see. It’s hard enough to promote a movie. When you’re also morally corrupting yourself, it’s a real bummer.”

Rogen said he also hit a wall creatively when he was offered the big budget opportunity to write and star in the superhero film “The Green Hornet.” Rogen had previously been given a lot of leeway with his smaller budget studio projects, but once he became a “bigger fish” attracting attention, the notes started rolling in.

“I remember telling people, ‘They don’t f— with us, it’s great,’ and then we were sitting in a meeting where [the executives] were like, ‘All right, notes. Page one,’ and I was like, ‘Page one?! What the f—,’ Rogen recalled. “I was like, ‘I’ve written two movies for you guys over the last few years, I thought we were cool. What are we doing here?'”

“The Green Hornet” was critically panned, though it made $227 million worldwide on a $120 million budget. And while Rogen doesn’t exactly look fondly on the film or the experience, it’s not that bad.

Check out the full interview with Rogen over at GQ, and see the stylish beach photo of Rogen and his Cavalier King Charles Spaniel below: 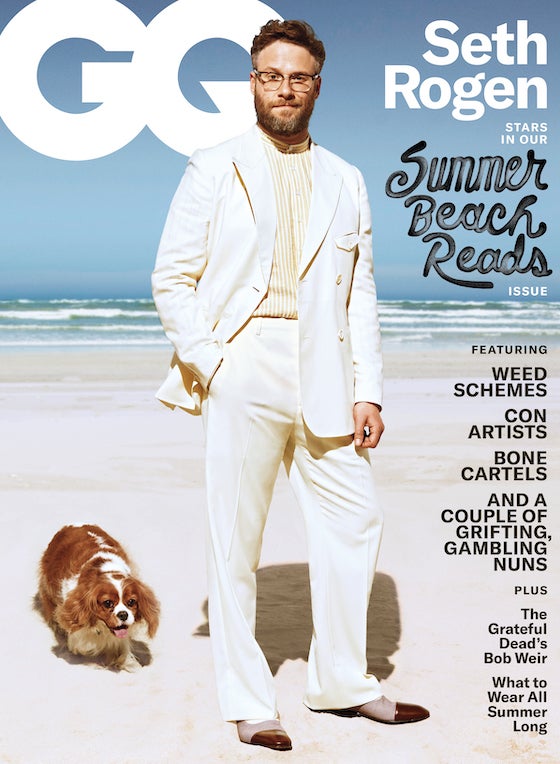