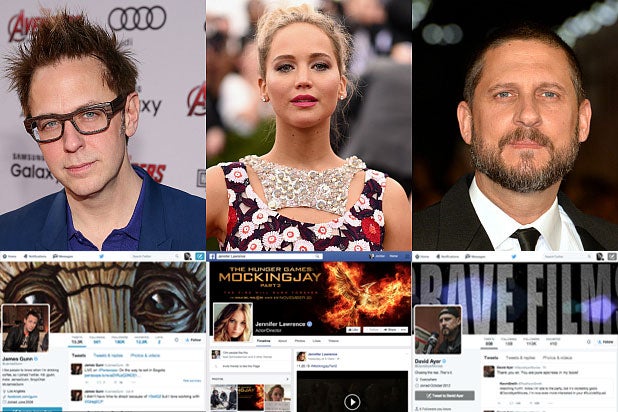 Instead, the studio turned to star Jennifer Lawrence, who blasted a first-look image of herself with co-stars Liam Hemsworth and Sam Claflin to her 12 million-plus followers on her Facebook page.

Actors and directors with strong personal brands have long been a marketing tool for Hollywood studios — and the pressure has become even more intense in the era of social media, where piggybacking on a star’s established social media presence can be easier than building a new online platform from scratch.

In addition to Lawrence’s “Mockingjay” photo, which “The Hunger Games” page then reposted, Will Smith premiered a trailer for “Focus” on Facebook and Jeremy Renner tweeted a photo while shooting “Captain America: Civil War.”

Increasingly, directors are also getting in on the action. Fans of the upcoming David Ayer film “Suicide Squad” have been getting exclusive behind-the-scenes sneak peeks via the director’s Twitter and Instagram accounts, including a first look at Jared Leto as the Joker. Ron Howard posted on-set pictures of Tom Hanks for the “Da Vinci Code” sequel “Inferno” to his Facebook page. And Eli Roth announced Blumhouse Production’s pickup of “The Green Inferno” via Facebook.

The move reflects the reality of marketing in the social media world.

For new projects like “Suicide Squad” or “Inferno,” it’s easier for studios to exploit existing online fan bases of directors than to try to build new accounts from scratch. “Suicide Squad” does not yet have an official Twitter account and the Warner Bros. Pictures Twitter is busy promoting “Entourage” and “San Andreas.” Meanwhile, the promotional Facebook page for “Inferno” is lumped with others in the Robert Langdon series that started with “The Da Vinci Code.”

Marketing execs see a real value in releasing promotional photos and videos through stars and directors because they seem more authentic to film fans than if the same content came from larger studio accounts.

“The idea of being able to speak directly to people is still such a new unique idea, and I don’t think people necessarily feel personally spoken to when it’s coming from a corporation,” Joe Quenqua, Executive Vice President and head of the entertainment practice at DKC Public Relations, told TheWrap.

The new trailer for Jurassic World. If you please… https://t.co/WHLQAp5Lx2

Consumers increasingly view many big movies, particularly ones based on sci-fi or comic-book properties, as the product of one filmmaker’s imagination. “You have a film — whether it’s made for $10 million or $200 million — it feels like it’s a director’s project,” Quenqua said. “It doesn’t feel like it’s born by a committee or studio or large producing entity, it actually is the vision of one person.” There are additional benefits to tapping filmmakers in the rollout of marketing and PR content. “It’s much less costly than the old things the studio used to do like buy ads in papers,” Ira S. Kalb, marketing consultant and CEO of Kalb & Associates, told TheWrap. “These guys, if they have a following of a large number of people, it’s a very economical way for them to communicate with those followings on Twitter, Facebook, etc.”

Also Read: Chris Pratt on His Love of Being Naked, Road Rage Advantages and Sending Poop Pics to Nick Offerman

And with news being broken online by directors and key talent, traditional media outlets increasingly find themselves out of the process — eliminating the downsides of granting exclusives.

“In the past, you have to make those choices about pitting one media outlet against the other,” Quenqua said. “The beauty of when you actually have a filmmaker doing it on their own, and doing it on the behalf of the studio, it’s equitable. It’s a decision that doesn’t piss anyone off, because everyone got it first.”

However, there are definitely risks to the strategy of outsourcing traditional studio promotional materials to outsiders. “A lot of these people are not trained in public relations, so they are not tuned in to what they say and how it might affect people,” Kalb said. “I would not say it’s good or bad — I’d say it’s risky.”

The risk is less from over-sharing content in advance of a film’s release — since filmmakers typically work in partnership with studio marketing teams to parse out photos and teasers — than from talent straying off message during their off hours, when executives aren’t looking over their shoulder.

Case in point: On Sunday, “Guardians of the Galaxy” director Gunn launched a long Ambien-fueled Periscope session in which he dished details about his sex life and about stars like Jared Leto. He deleted the post and apologized on his Instagram account.