“Succession” patriarch Logan Roy sure does yell a lot. But according to his Golden Globe-winning portrayer, Brian Cox, there is a method to his madness.

“Of course, I shout every now and again. And the REASON I SHOUT,” he bellowed in an interview with CNN reporter Sandra Gonzalez, training her computer speakers, “is to keep the audience, wake them up, and wake the other actors up.”

Cox doesn’t just reserve yelling for his character on “Succession,” which started its third season tonight on HBO and HBO Max.

“I scare people all the time, but I have done even before Logan Roy so it’s nothing unusual to me,” he said. “It’s a kind of hazard that I deal with all the time.”

Also Read:
How to Watch ‘Succession’ Season 3: When the Drama Series Will Be Streaming

Sure, playing a powerful, no nonsense patriarch who knows exactly how to intimidate and manipulate can be fun, but Cox said that Logan’s personal dysfunction is what he enjoys the most about him.

“You can’t underestimate Logan in any shape or form because he’s an extraordinary animal,” he said. “Logan, you know, there aren’t very many characters like him in drama. We haven’t seen them. Because he’s relentless. He doesn’t seem to take any prisoners. That’s the joy of playing him.”

The wealth dynamic is critical to the show, Cox said, because it reflects the reality of rich people in today’s world. As for the recent space race between wealthy men, Cox disapproves.

“Eleven minutes up in space. Give me a break. What does that mean?” he said. “You know, Richard Branson, ‘More spaceships’ and you go, ‘No, no, no, we don’t need more spaceships. We need to take care of our world. We need to really look after our world and what our world is and what’s going on.'” 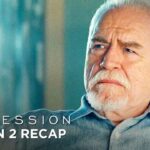 Also Read:
‘Succession’ Recap: Catch Up on Season 2 in Under 3 Minutes (Video)

Cox returns as Logan Roy, patriarch of the Roy family and founder of media conglomerate Waystar Royco, in the premiere episode of “Succession” Season 3 tonight on HBO and HBO Max. His children, portrayed by Sarah Snook, Jeremy Strong and Kieran Culkin continue to fight for the throne of his media empire. Nicholas Braun returns as cousin Greg alongside Matthew McFayden as Shiv’s husband. Alan Ruck also returns as Connor Roy.