Gory Patiño earned a scholarship to study film at Chapman University and was living the dream of being a filmmaker in Los Angeles. But after receiving some advice to take his talents back to his home in Bolivia, his film “The Goalkeeper” — which he made upon returning — is now the country’s official submission for the 2019 Foreign Language Oscar race.

The Bolivian born Patiño had been living in America for 12 years, earning the Fulbright scholarship at Chapman and then working as a teacher and equipment manager at the New York Film Academy, making shorts, writing scripts and acting in other films along the way. But after being frustrated with a lack of results, a fellow producer suggested that to get his feet wet in the industry and develop as a filmmaker, he could have better luck getting his projects made in his home country of Bolivia.

Since then, he’s released “The Goalkeeper” and has already shot his follow-up feature. And now that he’s made it back to Hollywood, Patiño knows he made the right choice to return.

“It’s a change of plans,” Patiño told TheWrap’s Sharon Waxman Thursday night as part of TheWrap’s Awards and Foreign Screening Series at the Landmark Theatres in Los Angeles. “Filmmaking takes you to different parts, and that’s the beauty of it.” 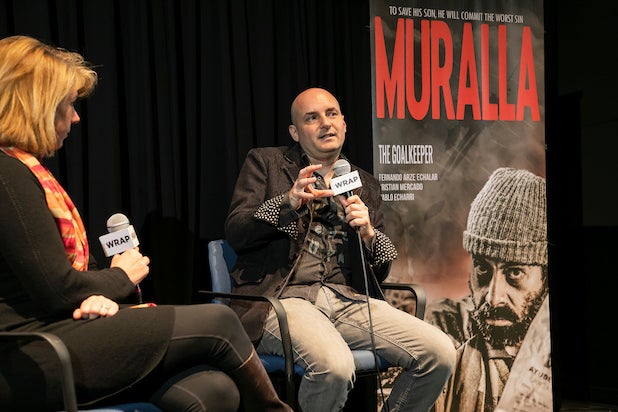 His film “The Goalkeeper,” also called “Muralla” (translated to “brick wall”) in its native language, marries an American thriller sensibility with a story that’s specific to Bolivia. It tells the story of a former star soccer goalie who now works as a taxi driver. Strapped for cash and desperate to pay his ailing son’s medical bills, he turns to a life of crime, tapping into Bolivia’s sinister human trafficking network.

Patiño says that human trafficking now brings in more money than drug trafficking in Bolivia, with children being taken into Peru, Argentina and elsewhere and sold into prostitution or as drug mules. He added that a quote recited in the movie, that eight minors disappear every day in the country as part of the criminal activity, is depressingly accurate.

“This is not only a cancer that happens in Bolivia. It’s a global thing,” Patiño said. “They kidnap young girls and young boys and take them out of the borders. So our borders are not controlled enough, and a lot of the police are involved in this crime, so the situation is getting out of hand.”

In fact, the human trafficking ring is such a fertile area for storytelling, Patiño is also in the works on a Bolivian TV series centered around the subject. And even though “The Goalkeeper” was released first, the film’s protagonist originated as a character spun off from the series, with both projects being shot concurrently.

The box office success of “The Goalkeeper” back in Bolivia, as well as its selection for the Oscars race, has earned him additional funding from the government for his next project, but Patiño still has an English-language thriller script in his back pocket and would love to one day take his talents back to Hollywood.

“I still want to tell stories from where I’m from because Bolivia still has a lot of stories that are needed to be told, but if I have a chance elsewhere, I’ll do it too,” Patiño said. “The searching I have is to look for my voice. A filmmaker’s voice is really important, so I think I’m in the process of doing it. The more I write, the more I direct, the more I will find my inner voice.”