So you’re wondering: What is the fuss all about over “Watchmen.”

So let me pull back the domino mask on why Alan Moore and Dave Gibbons’ graphic novel holds such significance to comic-book geeks worldwide (on par with “Schindler’s List” to Jews, or “Twilight” to teen girls). And give you a clue as to what Grand Adventure you are embarking upon at the theater. 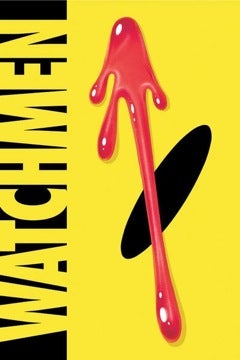 I won’t go over my full geek credentials — suffice it to say I am bald, single, still read comics and make my living writing down my fantasies. That should paint enough of a mental picture for you to accept my words here as having, if not DEADLY accuracy, then enough accuracy to leave a wound requiring stitches.

The simple explanation is that American comics rose out of pulp-magazine heroic fiction and fused itself to the Sunday color newspaper strips. They were cheap, disposable entertainment with every super-heroic adventure resolved by the time you reached the advertisement for the X-ray specs on the inside back cover.

They lived up to the idea of “a literature of no real consequence.”

Those anomalous American comics that did come close to serious issues and themes (notably “Enemy Ace” by Kanigher & Kubert, “The Spirit” by Will Eisner, “X-Men) were infrequent stones skipping across the comics pond, making an impact but certainly never REALLY diving under the surface to reach the true dramatic potential of the form.

By comparison, “Watchmen” was a boulder dropped into the comics pond from a mile up. The ripples, nay TIDAL WAVES, are still being felt.

“Watchmen” was the first comic book to take the whole premise of adventurers (not really HEROES) who dress up in gaudy costumes and punch the living daylights out of the bad guys, seriously. It took the outlandish premise SO SERIOUSLY, so THOUGHTFULLY and so ARTFULLY that afterward we weren’t reading comics anymore, we were reading GRAPHIC NOVELS.

Brilliantly, Moore and Gibbons realized the premise of costumed vigilantes, and then SUPERPOWERS — while still colorful, mythic and fantastic — is a pretty SCREWED-UP idea. Plop a costumed vigilante into the “real world,” and it changes everything: laws, fashion, celebrity, propaganda, government and power – and not necessarily in a good way.

Give one of them godlike superpowers, and you have the makings of a doomsday scenario. So yes, THAT serious.

Suddenly comics had a “literature of consequence” that followed the truism that it’s not the genre that determines the quality or seriousness of the story, but the approach.

The leap in quality and resonance that had been occurring in other genres and media (science fiction and mystery) finally happened to superheroes.

In April 1987 as the first issue hit racks of comic shops, designed like a cover to “Ad Age,” Comics as Literature arrived with a swift kick to the sack of long-underwear types of the past. Real people who just happened to wear masks or able to reconstruct matter and space time on a whim. Real problems (alcoholism, familial dysfunction, misogyny, impotence) manifesting themselves in a real world where costumed vigilantes existed.

The socio-politically skewed world of “Watchmen” (yes, a WORLD) validated what every geek secretly dreamed but never dared voice in public for fear of scornful laughter. In “Watchmen,” born out of Moore‘s four color nightmares and Gibbons’ architecture …

These characters were REAL.

American comics haven’t been the same since. Comics, and by association comic fans, went legit — changing everything about their position in pop media culture, creating the world we live in where comic book movies and television are the norm.

“Watchmen” did it first. Many would say, BEST.

So when you go into the theater this weekend, temper your expectation to the fact you are in fact going to see a LITERARY ADAPTATION that has always been in print, is listed on the New York Times’ Top 100 Novels Since 1923, has inspired countless books (“Hero,” Pulitzer Prize-winner “Kavalier & Clay”), comics (too many to mention), movies (“Batman,” “The Dark Knight,” “The Matrix”) and helped spawn the Graphic Novel section of your local bookstore as well as a regular column in Entertainment Weekly.

Bill Cunningham is a writer, producer and purveyor of pulp in a variety of entertainment media. He can be found at Pulp 2.0.

How Other Comic Books Fared

But Will They Watch "Watchmen"?