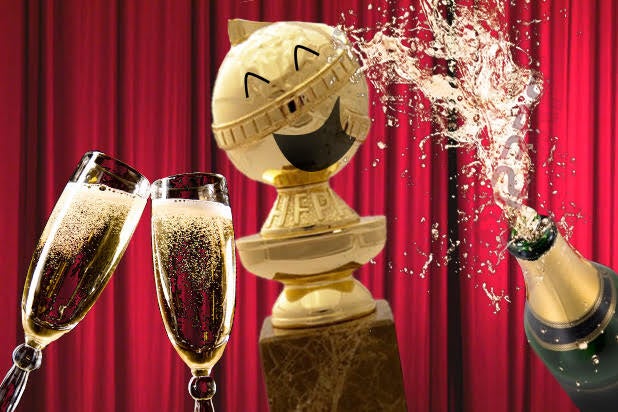 The Golden Globes are the most infuriating, overhyped, credibility-challenged stop on the awards circuit. Sometimes.

And they also make smart choices and are a lot of fun. Sometimes.

Here’s a primer to this weekend’s big kudos-fest.

Who votes for the Golden Globes, anyway?
About 90 members of the Hollywood Foreign Press Association. The website used to list their names, but now it just says “about 90 members.”

But they’re cinema experts, right?
Some of them. Maybe. They’re journalists who are based in Los Angeles but write (or take pictures) for foreign publications. Some are full-time journalists; others aren’t. They are not the journalists that studios hasten to quote in their “for your consideration” ads, because many of their outlets are on the obscure side, outside of their home countries.

Also, it’s safe to say that the median age is on the high side.

If you’re in a party with press and talent, how can you spot the HFPA members?
They’re either the ones at the buffet table or the ones getting their pictures taken with the stars. (That is perhaps an unfair generalization, but it is not without some truth.)

So why do stars show up?
Because the show is on TV.

And why is the show on TV?
Because stars show up.

But do they ever get it right with their votes?
They often get it right. Sometimes they do better than the Academy: In recent years they picked “The Social Network” over “The King’s Speech,” “Boyhood” over “Birdman” and “Brokeback Mountain” over “Crash” (which they didn’t even nominate, bless ‘em). In my book, those choices made them look smarter than the Academy.

So why do people in Hollywood roll their eyes when you mention the HFPA?
Because it’s annoying that so few people get so much attention. And because the longtime complaint has been that the road to a Golden Globe lies in wining and dining the voters, flying them to fancy places and posing for all their selfies. (For the record, the HFPA pays the airfare for its members’ many junkets – studios pick up the tab for room and board and entertainment.)

Well, is wining and dining the road to a Globe?
It has been, famously, on occasions that the HFPA will probably never live down. We don’t need to belabor them, but the most infamous involve “Burlesque” and “The Tourist” and, way back when, Pia Zadora.

The group’s longtime publicist also lobbed some inflammatory charges in the course of a nasty lawsuit.

Shouldn’t NBC run from a show like that?
They did, once, when the Federal Communications Commission investigated the Globes in 1968 and charged that they “misled the public as to how the winners were determined.” On the basis of the FCC’s complaints that awards were given out on the basis of lobbying and promises to attend the show, NBC pulled the Globes off the air until 1974.

How’d the HFPA fix things?
They made the process more transparent, got back on the air in the mid-’70s, brought in Dick Clark Productions in the ’80s, and saw the ratings soar in the ’90s.

Oh, and they found that it was profitable to paint their show more as a big party than as an awards show. It’s the place where the stars drink at their tables all night long and the stakes aren’t really too high. That means it can be a looser, livelier show than the Academy’s serious shindig.

So who are the cringe-worthy, potentially embarrassing winners this year?
Sorry to disappoint Globe bashers, but there really aren’t any. The last few years, the HFPA has tried pretty hard to clean up its messes, emphasize its journalism and produce a strong slate of nominees, and it’s actually done a decent job.

You can certainly mock the fact that they allowed Fox to designate “The Martian” a comedy to put it in less competitive categories, but that started with the studio, not the HFPA.

Do the Globes influence the Oscars?
Nope. Often the same movies and performers win, but as former Academy executive director Bruce Davis once pointed out, saying that a Globes win for a movie helps bring about an Oscar win for that movie is the same as saying that February causes March. One happens after the other, but that doesn’t mean the first one influences the second.

The Academy is made up of almost 6,300 film professionals. They don’t need 90 foreign journalists to tell them what a good movie is.

Except, perhaps, when they vote for “Crash” over “Brokeback Mountain.”

So why should we care about the Globes?
We shouldn’t, really. But so what? That doesn’t mean we can’t have fun watching them.