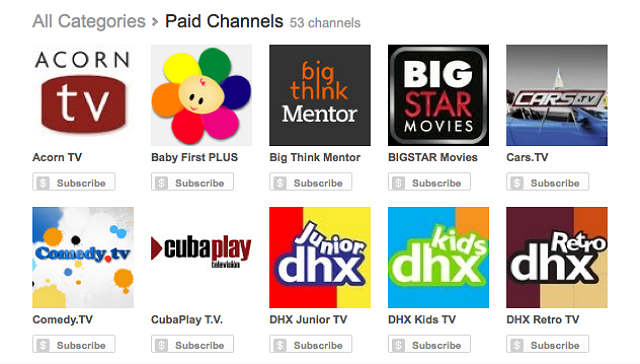 YouTube unveiled a new pilot program enabling 30 or so partners to charge people for access to their channels, enlisting entertainment companies like the Ultimate Fighting Championship, Sesame Street and independent distributor Cinedigm.

Even though the list of initial partners features no major media companies, such as News Corp. or Disney, Thursday’s announcement is the latest indication that YouTube and Hollywood are getting closer.

As Chris McGurk, the former vice chairman of MGM and current CEO of Cinedigm, told TheWrap, “Nothing draws Hollywood toward new platforms like money.”

The vast majority of YouTube videos remain free, but this is the first time YouTube will charge for channels, the centerpiece of its business. YouTube has spent the past couple of years reorienting its website around channels, and spent more than $100 million to fund ones it deemed premium.

Yet while YouTube has previously offered movie rentals, it has struggled to convince major Hollywood film and TV studios to put its best content on YouTube. Those studios were more interested in licensing films and TV to partners like Netflix, which charges users.

“If YouTube is going to attract the premium content that we all want it to attract, there needs to be another way to monetize out of pre-roll ads,” Sarah Penna, co-founder of prominent YouTube network Big Frame, told TheWrap. “There aren’t production companies putting a lot of money into production for YouTube because there isn’t a path to make that money back right now.”

Big Frame, like most of the major YouTube networks, opted against signing up for the service – at least at first. They want to wait and see how the subscription channels play out.

Hollywood studios have adopted the same position, as the ability to charge for channels doesn’t mean that they will immediately begin launching subscription channels.

Yet Hollywood has already indicated it is warming to the world of online video. DreamWorks Animation purchased multi-channel network AwesomenessTV while major media companies like Time Warner and Comcast have invested in other MCNs.

Now that YouTube can offer partners the option of charging for channels, it has improved its chances of luring more Hollywood partners and premium content.

Gravitas Ventures, a growing player in the film on-demand world, has placed its library on YouTube. Cinedigm, which launched a channel for documentaries, will look to launch additional channels for its library of horror films and action sports.

"The bigger, more traditional players are showing they see a lot of upside and that’s a really good thing,” McGurk said. “Instead of fighting new technology, Hollywood is stating to wake up to it."