“Wicked Tuna: Outer Banks” Season 8 comes to a wicked close Sunday with a supersized episode featuring one of the coolest death-defying moves we’ve ever seen from OBX crew. And TheWrap has your exclusive sneak peek at the incredible moment right here.

Per Nat Geo, on the season finale of “Wicked Tuna: Outer Banks,” word is out that the government quota is full and less than 24 hours remain for the boats to land a fish. But the ocean conditions are at their worst, forcing captains to risk a dangerous crossing or go home without a paycheck.

In the exclusive clip from the episode, which you can view above, Captains Bobby Earl of the Reel E’ Bugging and Adam Price of the Offshore Outlaw set the competition aside and team up to try to make the journey together to better their chances of survival. 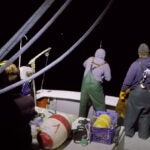 Yeah, Bobby’s Reel E’ Bugging is currently in second place and Adam’s Offshore Outlaw is way back in seventh — but safety comes first.

“Even when the competition is this tight, we still want to help each other out,” Bobby says in a voiceover, as he heads further out into the deep blue sea, attempting to break the waves up to make the trip easier for Adam behind him.

With the Coast Guard swirling all around them, the captains throttle through seas twice as high as their boats, going airborne in the waves. Things get real dicey there for a minute, but Bobby’s boat breaks through and so does Adam’s, and the teams cheer.

“That was a f—ing clusterf—,” Adam says to Bobby over the radio.

Ever the optimist, Bobby responds: “Dude, that was cool.”

The “Wicked Tuna: Outer Banks” Season 8 finale airs Sunday at 9/8c on Nat Geo. The episode will be a special extended 90-minute installment.