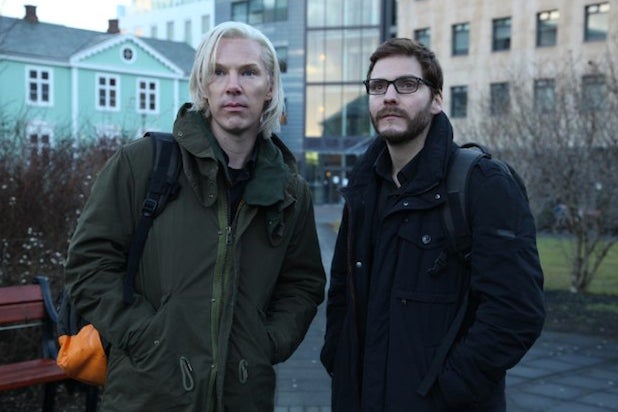 WikiLeaks is not happy with how it or co-founder Julian Assange is depicted in upcoming DreamWorks drama “The Fifth Estate.”

The international organization, which regularly releases classified or sensitive information to the public, has leaked a “mature version” of the script  accompanied with a lengthy memo explaining why Bill Condon‘s film is “irresponsible, counterproductive and harmful.”

Among WikiLeaks’ many complaints, the memo cites that the film only tells one side of the story because it is based on two books “written by people who had personal and legal disputes with” the activist organization. Daniel Domscheit-Berg, a former WikiLeaks spokesman portrayed by Daniel Brühl in the film, wrote “Inside WikiLeaks: My Time with Julian Assange at the World’s Most Dangerous Website,” while Guardian journalists David Leigh and Luke Harding wrote the other book cited as source material, “WikiLeaks: Inside Julian Assange’s War on Secrecy.”

“These are personally biased sources and are now outdated by three years. They tell only one side of the story,” the memo reads. These authors had an interest in portraying Julian Assange as dishonest or manipulative for competitive, personal and legal reasons.”

The memo also disputes a line in the script that asserts information WikiLeaks leaked in 2011 “exposed over 2000 confidential sources around the world,” and insists “not even the US government alleges that WikiLeaks caused harm to a single person.”

Furthermore, WikiLeaks faults the film for being “a work of fiction masquerading as fact,” and points to several quotes from star Benedict Cumberbatch — who plays Assange — that suggest the filmmakers has a specific agenda. The memo cites interviews in Vogue and Guardian where Cumberbatch said he felt Condon was trying to portray Assange as an “antisocial megalomaniac,” and was written as a “cartoon baddie” in an early draft of the screenplay.

And in case the public doesn’t want to sort through every falsehood WikiLeaks believes is featured in “The Fifth Estate” (there are a lot of them), the organization posted a two-word review of the Oct. 18 release on Twitter:

As WikiLeaks was never consulted about the upcoming Hollywood film on us, we’ve given our advice for free: It’s bad http://t.co/B5jqrwqD8U