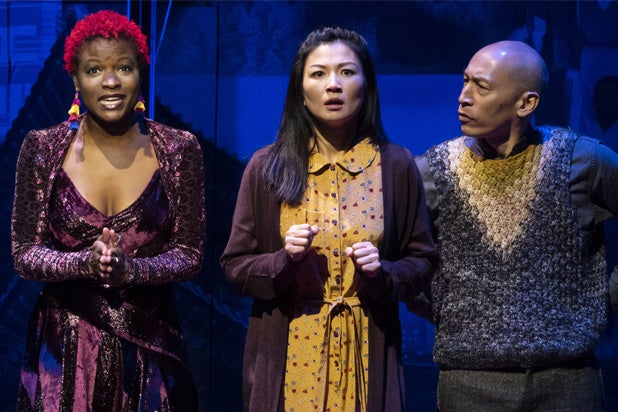 Shakespeare never had to face the impossible theatrical challenge of having two characters negotiate a conversation through Facebook. Hansol Jung handles that stage dilemma by employing a chorus of seven to impersonate two computers in her play “Wild Goose Dreams,” which had its New York premiere Wednesday at the Public Theater after a run last year at La Jolla Playhouse.

This chorus surrounds two computer-challenged people, Minsung (Peter Kim) and Nanhee (Michelle Krusiec), and they say things like “reboot” and “WTF” and “system not responding” and “OMG” and “refresh browser.”

If “Wild Goose Dreams” were set in the last century, we might expect to find some of this computer lingo exotic, maybe even amusing. But as Jung’s script tells us, the play is set “Now ish.” What gives it relevance is that Minsung and Nanhee live in Seoul, his wife and child are ensconced in the United States, and her family is trapped back in North Korea.

How bad is Nanhee’s guilt for having defected? Her father (the very amiable Francis Jue) makes appearances at the worst possible moments, like when she and Minsung are having sex. Nanhee’s dilemma is whether to stay with her family or to fly away from an oppressive political regime. It’s a serious one, and “Wild Goose Dreams” brings to mind political refugees not only from North Korea but Venezuela, Yemen, Syria and elsewhere.

What isn’t serious is the sexually skittish characters played by Kim and Krusiec, who appear to be performing in a very conventional rom-com despite all the talk of North Korea. Also mawkish is the stilted English they speak, even though this couple is apparently talking to each other in their native Korean.

I did learn something from Jung’s play. Nanhee makes more than one trip back and forth to the North, and despite reports to the contrary, “Wild Goose Dreams” makes it look like a very easy trek.

Meanwhile, the chorus that is the two computers never completely goes away, and director Leigh Silverman busies the stage with Keith Parham’s flashy lighting design, as well as Clint Ramos’s colorful set design, which puts the whole show inside a Seoul comic-book store even though only one scene is set in a Seoul comic-book store. “Wild Goose Dreams” means to tell us that it’s tough to forge personal relationships in a world of machines. Unfortunately, that always-lively computer chorus is far more engaging than Nanhee and Minsung.

Silverman’s kinetic direction does offer one moment of understatement. The stage is completely dark when Nanhee explores the wonders of Minsung’s penis. I’ve never sat so long in the dark in the theater and been so grateful for that complete lack of light.

But torture, starvation and incarceration North Korean-style are not enough. The new trend in theater is for playwrights to throw in a mass shooting or some other act of random violence to perk things up when the drama flags. Bad things happen all the time, but unlike real life, those bloody acts need to be motivated in the theater. When one of Jung’s characters decides to go violent, it doesn’t bring a quick end to “Wild Goose Dreams.” Rather, it provokes half a dozen endings, as if Jung couldn’t make up her mind what next to throw at the audience.