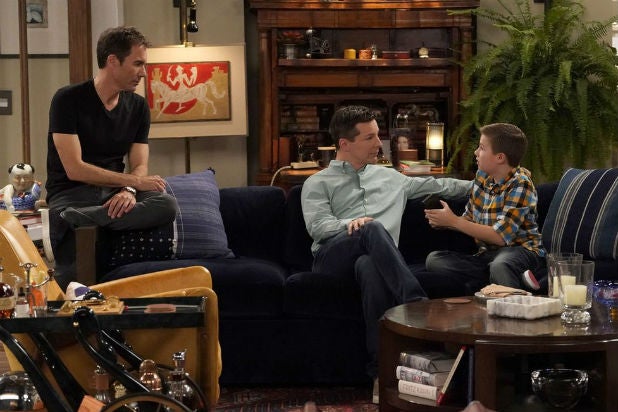 Jack met his grandson on this week’s “Will & Grace,” and vice president Mike Pence inadvertently made that happened.

Also Read: Sean Hayes Regrets Not Coming Out as Gay During 'Will & Grace' First Run

“It must have come from our interest in wanting to do an episode on conversion therapy because we were already into the presidency of the game show host that’s in the White House,” Mutchnick said. “We knew it was something that was on the minds of a lot of people because the vice president was a person that believed in the barbaric practice of conversion therapy. We don’t recognize it as a form of therapy — we only recognize it as a form of torture.”

During the episode of the revived NBC comedy, Elliot and his wife send Skip to a gay-conversion camp run by newlyweds Roberta (Jane Lynch) and Reggie (Andrew Rannells), until Jack steps in and encourages Skip to be himself.

Also Read: 'Once Upon a Time' Creators Tell Us if Trump Inspired Season 7's Real-Estate Villain

“We knew the concept of an age-conscious guy like Jack having a grandson was inherently funny, so we thought there’s enough here for a comedic engine,” Kohan said. “Within that, we wanted the opportunity for Jack to really get something across — to this child who’s now in his life — about who he is, about being strong, about living his truth. All of that could be couched in this inherently comic thing.”

The co-creators pointed out to TheWrap that they have no plans for Skip to return this season, although that could always change. But one thing they know for sure is that Will (Eric McCormack) planted one heck of a kiss on Reggie.

“We’re very lucky that we have a leading man that’s willing to go for it — gay, straight or otherwise,” Mutchnick said. “Eric McCormack always gives the male guest stars that are lucky enough to kiss him, a real good time.”