Will Ferrell is the sort of star who still touches people.

I know because the amiable goofball high-fived me — and a whole bunch of other aisle-seated audience members — last night as he exited Sydney’s world premiere of “Land of the Lost."

There’s a lot of talk of star power diminishing, but Ferrell still has the popular touch, as evidenced by the half-hour or more he spent joking with the hundreds of fans — some dressed as characters from his movies — who’d turned out to line the red carpet at the Greater Union George Street multiplex. 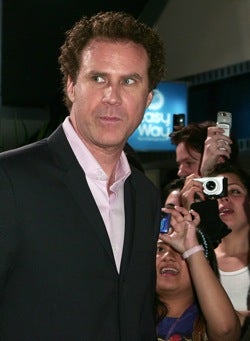 Inside the theater, Ferrell took to the stage, along with director Brad Silberling, and the A-lister had the 400-strong premiere audience eating out of his hand.

“Aussie! Aussie! Aussie!” he cried, with the crowd dutifully responding “Oi! Oi! Oi!” before cracking up that the visiting star had so quickly embraced that peculiar boisterous chant used at Australian sporting events.

“I told you they’d do it,” Ferrell deadpanned to Silberling. “You owe me 20 bucks.”

Trim-looking Ferrell (is he the only star who puts weight on for roles?) joked he was “mildly thrilled” to be debuting the film in Sydney before its Hollywood premiere.

It’s the second such recent event after “Star Trek” was officially unleashed at the Sydney Opera House in April.

Ferrell turned his attention on the audience, focussing on a headband-wearing dude who was the only person in the front row.

“He doesn’t have any pants on, that’s the weird thing,” Ferrell riffed to huge laughter.

The star also lapped up a four-person standing ovation.

“It’s kinda creepy how much I love you,” he said.

Silberling asked who in the crowd had seen the original “Land of the Lost” series and was met with three hands raised.

Unfazed, he said those people would remember what a “very twisted property” it was while the rest of us would soon see how much fun he and his star had had with it.

Silberling declared Ferrell’s performance was “OK” in the movie and that they’d better get the film going.

He added that Baz Luhrmann had a cameo.

More laughs, and then the lights dimmed and Ferrell was off up the aisle, graciously high-fiving fans.

(It was impossible to resist — and any interested Ferrell devotee might want to check out my eBay auction of my neatly severed hand, unwashed and with a certificate of authenticity.)

As for the movie?

“LOTL” is not as laugh-out loud funny as “Talladega Nights” or even “Blades of Glory,” but it’s more consistently chuckle-worthy than “Step Brothers” and goes a long way to erasing the memory of the labored “Semi-Pro."

Danny McBride, here building on “Pineapple Express” and “Tropic Thunder," makes a good sparring partner for Ferrell, and the two bounce off each other like a pair of demented pinballs.

Silberling, whose underrated “Lemony Snicket” occupies similar territory, is smart enough to realize that, in keeping with Sid and Marty Krofft’s TV creation, “LTOL” does not have to make a lot of sense.

In that spirit, we’re happy to accept that a patched together “Tachyon amplifier” plays Pterodactyl-soothing show tunes or that Anna Friel’s palaeontologist conveniently speaks the dialect used by prehistoric man.

Fast-paced set-piece silliness prevails — and that’s to the benefit of the film.

Also appealing is that Silberling catches the goofiness of the original show by smartly using some men-in-suits and backdrops that have the whiff of Styrofoam amid accomplished CGI dino effects and parallel universe landscapes.