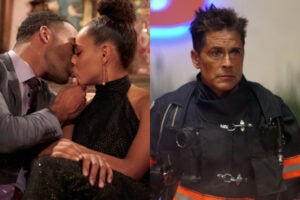 ”People underestimated the sheer will of our team at AMC to power through this crisis,“ CEO Adam Aron tells TheWrap, despite a 91% drop in revenue

AMC Theatres has spent the COVID-19 pandemic trying to stave off bankruptcy, but its latest round of financing may have bought the theater chain enough time to survive until cineplexes can reopen…at least, if that reopening comes sometime this year.

On Monday, CEO Adam Aron announced that the company has raised $917 million in new equity and debt capital and expects that the new cash flow, combined with negotiations with landlords on lease payments and successful vaccination of millions of Americans, should be enough to prevent AMC from having to file bankruptcy before health officials give movie theaters the green light to reopen.

Currently, about 74% of AMC’s U.S. circuit — the country’s largest theater chain —  is open with only 155 of its 593 locations closed due to state COVID mandates. But with last weekend’s North American box office falling to just under $10 million, revenue has almost entirely collapsed for the company as it has for the entire exhibition industry.

While AMC has yet to release its Q4 earnings, the chain reported a 92.5% drop in attendance year-over-year through the end of September and a 91% drop from the $1.31 billion in revenue that it generated in the first nine months of 2019. And since the pandemic began, AMC’s total debt has ballooned to over $11 billion according to balance sheets, though the company has been able to keep it from growing even larger through debt swap deals with bondholders made this past summer. 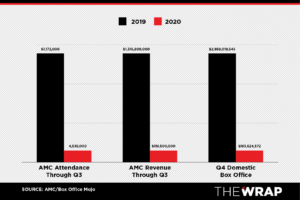 Winter releases like “The Croods: A New Age” and ‘Wonder Woman 1984” may have provided a small burst of revenue, but the escalation in COVID-19 infections during the usually busy holiday season is expected to keep that year-over-year attendance drop dramatically steep as overall box office for Q4 dropped 93.6% from $2.88 billion in 2019 to just $183 million in 2020 as the number of films released in that quarter fell from 350 in 2019 to 149 in 2020.

Still, AMC says the new financing will give the studio enough cash flow to survive even if the pandemic forces early summer blockbusters like “Black Widow” and “F9” to move. At the end of 2020, AMC had about $300 million in cash reserves with monthly average cash burn of approximately $125 million. The new funds come from $506 million in equity that has come from issuing 164 million new shares since mid-December, along with $411 million of debt capital.

The new cash flow is expected to last into early Q3, when theater owners are expecting that the vaccine will be available to the general public and studios will begin to release films theatrically on a normal basis again. While recent news about the challenges facing the Biden Administration and state health officials on vaccine production and distribution forced more than 20 films to move their release dates, AMC is still confident that studios will resume a normal releasing schedule sometime in the second half of 2021.

In an interview this week, Aron told TheWrap that he’s more confident than ever that AMC will be able to stay a major presence in the film industry on the other side of the pandemic. Wall Street may be starting to believe that, as well, as the chain’s stock increased by 61% from $2.89/share to about $4.66/share following the financing announcement.

“There’s been a lot of headlines about how we weren’t going to survive this and have to file for Chapter 11,” Aron said. “And I think those people underestimated the sheer will of our team at AMC to power through this crisis. I think we’ve proven that we are a resourceful and creative bunch at AMC and that we’ve navigated these uncharted waters quite skillfully.”

But Eric Schiffer, CEO of The Patriarch Organization and chairman of Reputation Management Consultants, thinks that there are still many challenges that AMC will have to face even if box office recovery begins in earnest sometime in July. While many studio distribution execs and theater owners believe that the end of the pandemic will bring a pent-up demand from moviegoers to see the biggest movies on the biggest screens, Schiffer thinks it will take longer than expected to fill theaters again because of a reluctance to go back to places where the risk of contracting COVID-19 is high.

“With films like ‘Wonder Woman 1984’ now coming out on streaming, there’s been a big shift in how consumers see movies, and I think there’s a greater comfort for many in seeing a lot of these big movies at home, especially now that HBO Max is offering so many of them,” Schiffer said, referring to Warner Bros.’ recent decision to release all of its 2021 films on streaming the same day they release in theaters. Aron declined to comment on talks between AMC and Warner Bros., though the CEO came out strongly against the move when it was announced back in December.

Schiffer also points to another potential wrench in AMC and other theater chains’ reopening plans: The new COVID-19 variant strains. Reports have surfaced of new strains of the virus, which are more contagious, appearing in the U.K, South Africa, and some parts of the U.S.

Epidemiologists have warned that if this strain becomes the dominant form of the virus, even indoor activities once seen as low-risk environments, such as grocery shopping, may become more likely hotspots for infection, let alone environments already seen as high risk, such as movie theaters. Schiffer believes that the strain could make it harder for theaters to convince people that it’s safe to come back.

“AMC’s calculus is like a Hollywood happy ending, but the challenges they are dealing with are a much more complicated scenario. The likelihood of people clamoring in the second half of 2021 to come back to theaters when these variants could make the virus more contagious is a lot lower than I think a lot of theater owners are willing to admit,” he said.

Aron isn’t fazed by the variants or any warnings that the vaccine may take longer to distribute. He says that AMC has been in close contact with epidemiologists and other health experts throughout the pandemic and says that, based on those talks, he’s very confident that vaccine distribution will ramp up over the course of the coming months and avert the worst case scenarios that some health officials have warned of.

“They’re telling me that infection rates and hospitalizations are going to come down when even 20% of the population is vaccinated,” he said. “Of course, that doesn’t mean the virus will have totally gone away, but the situation with handling the virus should be markedly improved by the end of the second quarter.”

Aron also shrugged off concerns about the COVID-19 variants, saying they will continue to follow advice from their team of health experts as new information about the virus comes in.

“All I can tell you is that we will follow the science, take the precautions we need to take, and what I’m hearing from health experts is that conditions are going to be much better this summer than where we are in presently.”