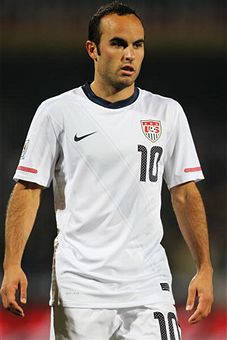 Landon Donovan will make his first talk-show appearance Tuesday night on CBS' "Late Show with David Letterman," and the big, uncomfortable question Dave gets to ask this time: So what's up with the love child?

The 28-year old U.S. soccer star, who is separated but still married to "Rules of Engagement" actress Bianca Kajlich, did not deny fathering a child with a British woman after Sports Illustrated asked him about it Sunday.

Donovan, who scored three of the five American team's goals during Cup play, said he'd support the child if he proves to be the father.

Usually, appearances by star athletes following major events are soft interviews. But Letterman has an opportunity to make some news on Tuesday night if Donovan chooses to discuss the situation.
Although he acknowledged the possible paternity situation, Donovan refused further comment to Sports Illustrated, saying it was a private matter.

Kajlich married Donovan on New Year's Eve 2006. Although they have been separated, she attended the Cup games in South Africa, and there were reports that the couple might get back together. She has not commented publicly about the allegations so far. The couple have no children together.