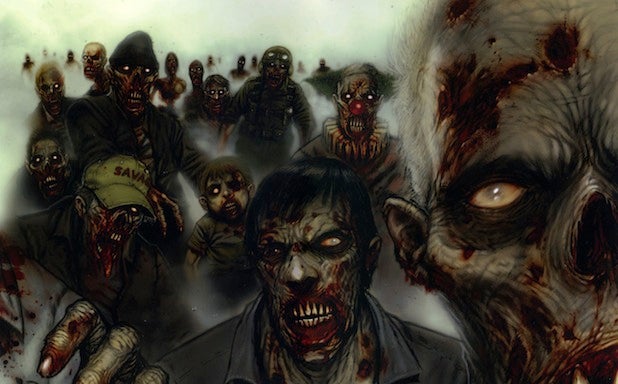 It may have taken longer than usual this year, but the post-Toronto spec market is thriving again after Universal and Legendary spent seven figures apiece to acquire Aaron Berg’s “Section 6” and Lisa Joy’s “Reminiscence,” respectively.

The hot spec that has Hollywood in a frenzy this week is Mike Le’s zombie script “Patient Z,” which hits the town just days after the record-breaking season 4 premiere of AMC’s “The Walking Dead” brought in more than 16 million viewers. That’s good timing, especially as Halloween approaches.

Set in a post-apocalyptic world, “Patient Z” is a contained action-thriller about a man with the ability to speak the language of the undead who interrogates zombies with the hopes of finding Patient Zero and a cure for his infected wife.

The script has attracted the attention of several mini-majors, while other top-tier production companies in the mix include Silver Pictures, Davis Entertainment, Broken Road Productions, the Donners’ Company, “We’re the Millers” producer Vincent Newman Entertainment and Misher Films, whose “Carrie” remake is expected to open to more than $20 million this weekend.

The character-driven script features a rich mythology and is described as being in the vein of “The Walking Dead” and “Warm Bodies.” An individual who has read the script told TheWrap it has the potential to reinvent the zombie genre like Danny Boyle’s “28 Days Later,” while another compared it to “Interview With a Vampire,” but with zombies.