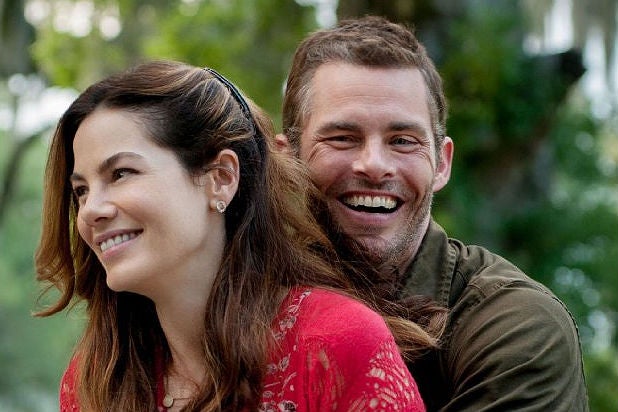 You can pretty much count on Nicholas Sparks flying at the box office.

Relativity Media’s “The Best of Me,” the romantic drama that opens nationwide Friday, will be the ninth movie adaptation of the prolific author’s works. Modestly budgeted films including “The Notebook,” and Relativity’s “Dear John” and “Safe Haven,” have mobilized Sparks’ fan base, been solid performers at the multiplexes and landed squarely in the black. They’ve also provided boosts for the earlier careers of actors like Ryan Gosling, Rachel McAdams, Channing Tatum and Zac Efron.

But pre-release tracking for “The Best of Me” has it opening at around $12 million for the three days, which would make it the softest debut for a Sparks adaptation since “A Walk to Remember” back in 2002. “Dear John” and “Safe Haven,” the second- and third-highest grossing of Sparks’ films, were both released in February, the former to $30 million on Super Bowl Sunday in 2010 and the latter to $21 million on Valentine’s Day weekend last year. Those are both more female-friendly dates than the middle of  fall, which is often dominated by darker, R-rated fare, and that could be a factor.

Watch video: James Marsden and Michelle Monaghan Find Love Again in ‘The Best of Me’ Trailer

“There’s always an audience out there for this kind of movie, and I don’t really think Sparks’ appeal is fading one bit,” said Exhibitor Relations vice-president and senior analyst Jeff Bock. “I think the key for this movie will be how much excitement the marketing and cast is able to generate.”

(Read more after the chart)

“The Best of Me” is directed by Michael Hoffman, who adapted from Sparks’ 2011 bestseller with Will Fetters and J. Mills Goodloe,  (“The Last Station”). It features Michelle Monaghan, Liana Liberato, Luke Bracey and James Marsden, who got the call to play the male lead a month after the November 2013 death of Paul Walker, who was originally set to star.

It tells the story of Dawson (Marsden) and Amanda (Monaghan), two former high school sweethearts who find themselves reunited after 20 years apart, when they return to their small town for the funeral of a beloved friend.

It’s going up against two other wide opening films, the Brad Pitt-Shia LeBeouf war movie “Fury” and the animated kids film “The Book of Life.” Those films target entirely different audiences than “The Best of Me,” which will play most strongly with women, particularly those over 25, and tracking has been erratic of late so it could do better than expected.

“It will be the only romance out there, and that’s bound to help,” said Bock. It also provides counter-programming for “Gone Girl,” the dark thriller that has topped the box office for the past two weekends and offers a much different take on relationships than Sparks’ works typically do.

Watch video: Lady Antebellum Music Video Is Best Trailer Yet for Nicholas Sparks’ ‘The Best of Me’

Another encouraging sign Relativity is that one of the films among the slowest starters, “The Notebook,” went on to become Sparks’ highest-grossing, rolling up $81 million after debuting with $13.4 million in 2004. If “The Best of Me, ” produced for a reasonable $26 million by Relativity, DiNovi Productons and Sparks, displays the staying power of most of the author’s movies, it should turn a profit.

Hollywood remains bullish on Sparks, and several adaptations are in the works.

“The Longest Ride” is in the works at Temple Hill Entertainment, the company behind “The Fault in Our Stars” and the “Twilight” franchise, and is set for April next year from Fox. And Lionsgate recently cast another Sparks adaptation, “The Choice.”