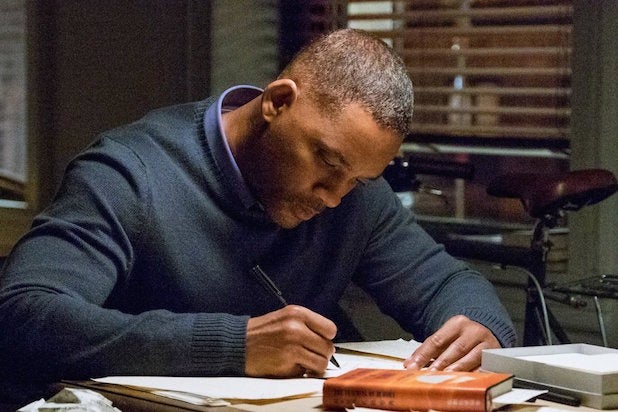 Will Smith’s holiday drama “Collateral Beauty” came in at an abysmal $7 million this weekend, as it dared to debut against the juggernaut that is “Rogue One: A Star Wars Story.”

Counting box office disappointments starring Smith, including the 2013 sci-fi flick “After Earth” and last year’s crime dramedy “Focus,” “Beauty” is another unattractive result in the actor’s resume that has grown worryingly heavy with more misses than hits.

Something of a modernized “It’s a Wonderful Life,” “Collateral Beauty” was made for $36 million, not counting marketing costs. The New Line release was co-financed by Village Roadshow and also opened to $4.6 million in 16 international markets, including Russia and Mexico — making its global total $11.6 million, still a disappointing result.

“Collateral Beauty” revolves around a New York executive (Smith) who retreats from his life after suffering a great personal tragedy. He later seeks answers from the universe on the topics of Love, Death and Time.

It has a not-so-pretty 14 percent on Rotten Tomatoes, though an A- CinemaScore (awarded by those surveyed on opening night) could keep it from flatlining in the weeks to come.

Its estimated $7 million from 3,028 locations came in at nearly half of initial estimates of $12 million from both trackers and distributors at Warner Bros. — accentuating the severity of the box office misfire.

Also Read: Will Smith Says Jaden and Willow School Him on His Fashion Sense

This is sadly becoming a familiar story for Smith, who was once a big box office name, carrying hits like 1996’s “Independence Day” and 1997’s “Men in Black” with his sheer star power.

So, what has changed?

“Will Smith is in a serious transition mode: from Blockbuster Savior to Mr. Joe Regular,” said Jeff Bock, senior analyst at Exhibitor Relations.

Of course Smith starred in the summer hit “Suicide Squad,” which amassed the biggest box office returns of any title in which he has starred. But the Warner Bros. comic book tentpole certainly didn’t depend on Smith’s star power to succeed. “It was more about the property instead of his name above the title like it used to be,” Bock told TheWrap. “I just don’t think he’s being offered top tier roles anymore these days,” he added.

Smith undoubtedly stretched his skill set in 2015’s “Concussion,” which didn’t earn nearly the level box office or critical acclaim it set out to achieve. Still, said Bock, “He doesn’t diversify much anymore; he pretty much plays very safe roles… and, unfortunately, his fan base isn’t what it once was.”

Even with misfires, Smith is far from reaching a career death sentence, as he has three films on the horizon, including two “Bad Boys” sequels. The choice to re-team with Martin Lawrence for new installments of the action comedy could be a move to restore his fading box office prowess — seeing as both 1995’s “Bad Boys” and 2003’s “Bad Boys II” were unmitigated global hits.

Smith next appears in the R-rated “Bright,” a film by his “Suicide Squad” director David Ayer in which he plays a cop. The story details have been kept largely under wraps but we do know it’s a police procedural that also includes mythical creatures.

“Being part of ‘Suicide Squad’ will keep him relevant for years to come,” said Bock. “However he needs to challenge himself and try to do something that really pushes the boundaries, instead of taking a paycheck for movies like ‘Bad Boys 3’.”