Using advanced new de-aging technology, Will Smith goes face to face with his greatest enemy in the first trailer for “Gemini Man” — himself.

In Ang Lee’s futuristic thriller, Smith plays a world-class assassin hunting a man who knows his every move, only to discover that the target is actually his clone. The twist is, this trailer begins from the perspective of the young Will Smith, and you’ll do a quick double take when you realize you’re looking at a “Fresh Prince” era Smith rather than how he actually looks in 2019.

“This story is not one that could have been told with cinema as we know it. However, thanks to incredible new digital technology, not only can we finally see both younger and older Will Smith embodied together on screen, but we can also experience the story in a deeply immersive way,” director Lee said in a statement. “It is my great fortune to be able to experiment and test the limits of what new digital cinema has to offer us. No less so to be able to work with two Will Smiths – one beautifully sophisticated, the other exuberantly honest.

“In my opinion, this is Will at his very best, and when the two come together, it is something truly magical,” the “Crouching Tiger, Hidden Dragon” and “Life of Pi” director continued. “Further, the immense effort and technical skill of the crew in creating a new aesthetic, between the cinematography, art department, visual effects, and technical team, was both inspiring and heartwarming. I truly hope that this movie delivers a completely new theatrical cinematic experience to audiences across the world.”

Having been de-aged over 25 years for the role, the “emotional and physical challenges of making this film have been the most demanding of my career,” Smith said in a statement. “Ang is pushing the limits to give people an experience in the movie theater that you can’t get anywhere else. This is not only an action film, but an exploration of what one’s younger self can ultimately teach one’s older self.

“I’m 50-years-old now, and the irony of becoming 23-year-old Junior in this film is that 23-year-old me wouldn’t have been ready for this experience or to take on this role,” he added .”Our hope is that this story provides something for everyone — never before seen cinematic wizardry, nuanced, relatable characters and next-level action.”

Also Read: Will Smith's Genie Sings 'Friend Like Me' in CinemaCon's 'Aladdin' Footage

According to an individual familiar with the procedure, the process for de-aging Smith is actually different from the de-aging technique that has traditionally been used in film, as well as most notably on this year’s “Captain Marvel,” in which Samuel L. Jackson was de-aged 25 years. Typically, a body double is utilized to digitally alter a character’s appearance. But on “Gemini Man,” Smith donned a motion capture suit while performing as his younger self “Junior,” and a CGI character was built from scratch. VFX artists created Junior’s muscular, vascular and dental structures to create a fully CGI human, and Smith’s performance was then digitally layered onto the CGI creation you see on screen.

The screenplay for “Gemini Man” comes from “Game of Thrones” co-creator David Benioff along with Billy Ray and Darren Lemke based on a story by Benioff and Lemke. Clive Owen, Mary Elizabeth Winstead and Benedict Wong also star.

“Gemini Man” opens in theaters from Paramount and Skydance on Oct. 11.

Watch the first trailer above and see the first poster below. 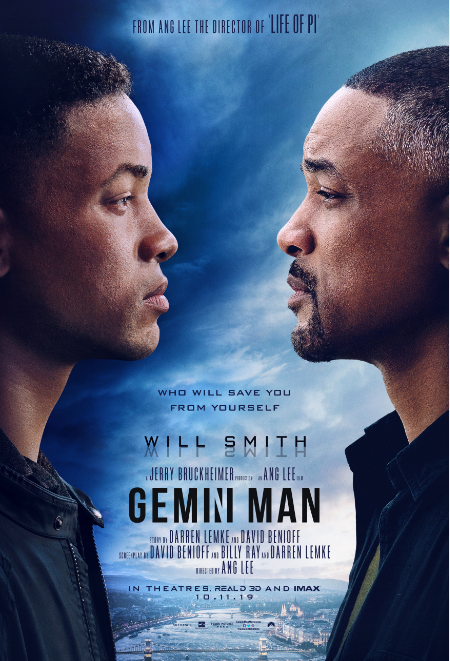