Will Smith resigned from the Academy of Motion Pictures Arts and Sciences in a statement Friday, saying he will accept any further consequences the Academy’s board deems appropriate after his Oscars slap of presenter Chris Rock.

“Change takes time and I am committed to doing the work to ensure that I never again allow violence to overtake reason,” the “King Richard” star said in a statement.

Smith added that he had directly responded to the Academy’s disciplinary hearing notice. And he again apologized to the Academy, to Chris Rock, his family and friends and those in attendance, the nominees and winners and more.

I have directly responded to the Academy’s disciplinary hearing notice, and I will fully accept any and all consequences for my conduct. My actions at the 94th Academy Awards presentation were shocking, painful, and inexcusable. The list of those I have hurt is long and includes Chris, his family, many of my dear friends and loved ones, all those in attendance, and global audiences at home. I betrayed the trust of the Academy. I deprived other nominees and winners of their opportunity to celebrate and be celebrated for their extraordinary work. I am heartbroken. I want to put the focus back on those who deserve attention for their achievements and allow the Academy to get back to the incredible work it does to support creativity and artistry in film. So, I am resigning from membership in the Academy of Motion Picture Arts and Sciences, and will accept any further consequences the Board deems appropriate. Change takes time and I am committed to doing the work to ensure that I never again allow violence to overtake reason.

Smith’s resignation means that he’ll be unable to vote on next year’s Oscars or participate in other Academy events. And as for what other discipline the Academy could hand down, they are still likely to not invite him to the ceremony or present the Best Actress award at next year’s Oscars, as is usually tradition for the prior year’s Best Actor winner. If he’s deemed ineligible for awards consideration, it could further impact the plans behind his next movie “Emancipation,” a runaway slave drama he stars in that is directed by Antoine Fuqua and will be released by Apple.

The Academy met on Wednesday in an emergency board meeting of its governors to begin its formal review process, and Smith could’ve potentially faced expulsion or suspension from the Academy, as well as potentially becoming ineligible for award consideration. It’s possible too that the Academy could choose to revoke Smith’s Oscar that he won on Sunday for Best Actor, but such an outcome is unlikely and has never happened regarding an issue of conduct.

The Academy’s board will again meet on April 15 to determine additional consequences as part of the formal review process. 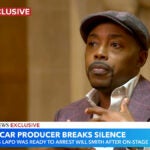 Also Read:
Oscars Producer Will Packer Says He Lobbied Not to Boot Will Smith Because ‘Chris Rock Doesn’t Want That’ (Video)

Smith’s resignation is the latest in a full week of backlash since the Oscars, in which he reacted to a joke by Chris Rock about Jada Pinkett Smith by slapping him in the face and twice shouting, “Keep my wife’s name out your f–ing mouth.” It’s led to many wondering what the actor’s future in Hollywood will be or if he can still be considered the same level of bankable, A-list star, and it’s led to further scrutiny of the Academy over why Smith was not removed from the Oscars after the incident.