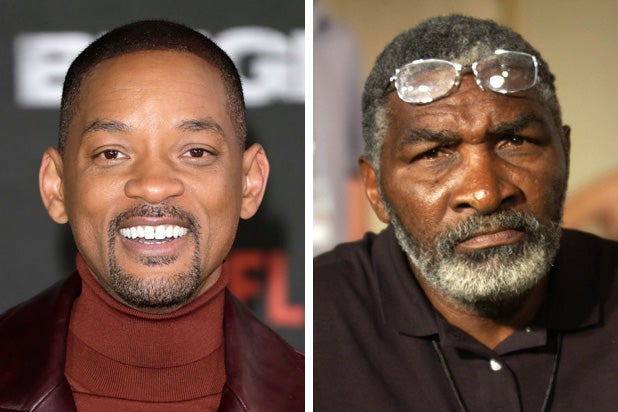 Back in 2016, Will Smith and his wife, Jada Pinkett Smith, marched to the front line of the #OscarsSoWhite movement. The couple, among others, boycotted the Academy Awards that year in response to actors of color, including “Concussion” star Will, being shut out of the nominations in all four acting categories for the second consecutive Oscars.

Hollywood and the Academy of Motion Pictures Arts and Sciences have been trying to do better since then. “Black Panther” and “Crazy Rich Asians” were two of the biggest box office hits of 2018, and the Oscar ceremony rewarded more black artists and craftsman than ever before.

Suddenly, though, to some, Will Smith isn’t black enough. The actor has landed at the center of controversy over casting as Richard Williams, the father of tennis superstars Venus and Serena, in the upcoming biopic “King Richard.” According to the movie’s early critics on social media, Smith, a former rapper who earned his first Oscar nomination for his role as boxing great Muhammad Ali, is too light-skinned to play dark-skinned Richard.

As they see it, the casting is colorism in action. The word “colorism,” which, in the context of Hollywood, is related to “whitewashing” but not the same thing, refers to the hierarchical categorization of nonwhite people according to skin tone. Those who are lighter head to the top rung, while the darker ones languish at the bottom.

Colorism is a significant problem in Hollywood, especially with black performers. Directors, producers and casting agents often seem to favor biracial and light-skinned blacks, presumably because they are closer to the idealized white beauty standard and therefore more acceptable to white audiences. The bias was notable last year in the multicultural casting of director Greg Berlanti’s LGBTQ comedy “Love, Simon.” All three of the black-ish actors in main supporting roles, including the one who played the title character’s eventual love interest, were biracial and could pass for off-white.

It’s also why the new Netflix series “Sex Education” is so groundbreaking. Not only does it have two black actors in central roles, but both are dark-skinned. One character is gay and the other is straight. They each have onscreen sexual encounters with white characters, and there’s nary a mention of race. That’s progress.

So is Smith snagging the Richard Williams role a step back? It feels more like a sideways move. There’s nothing particularly groundbreaking about Smith as the top-billed title character in “King Richard,” but he’s certainly black enough for the job.

Some have suggested that Mahershala Ali or Idris Elba would have been more suitable choices. Maybe so –  if a close physical approximation to a real-life subject was mandatory. In recent decades, however, both Anthony Hopkins and Frank Langella have scored Oscar nods for playing 37th U.S. President Richard Nixon despite looking absolutely nothing like him, proving that sometimes it’s more important to capture the spirit and essence of a real-life character rather than the exact physicality.

After all, Smith earned his second Oscar nomination playing businessman Chris Gardner in the 2006 film “The Pursuit of Happyness“ even though the real-life Gardner was several shades darker in skin tone. Maybe it was because few people knew what Gardner actually looked like or because social media wasn’t really a thing yet, but there was no “Oh no, he didn’t” outcry back then.

It’s not like Mahershala Ali, who just won his second Oscar, and Elba, who is at the top of so many wish lists to be the next James Bond, are too black to find gainful employment in Hollywood. Smith’s casting probably has more to do with his bankability and box office potential than fear of a too-black actor. (Ironically, Elba will replace Smith as Deadshot in the next “Suicide Squad” film.)

Smith as Williams is hardly the same as the egregious casting of Zoe Saldana as Nina Simone in the 2016 biopic “Nina,” which required the actress to wear skin-darkening makeup to appear more acceptably Nina-esque on screen. The late singer and civil rights activist’s chocolate beauty and strong black features were essential parts of who she was as an artist and as a woman. They were indivisible from her narrative. Only a comparably darker-skinned actress  —  say, a Mary J. Blige or a Jennifer Hudson —  would have been appropriate in the role.

Casting the more caramel-colored Saldana, who is of Dominican and Puerto Rican parentage, in such a quintessentially “black” role inadvertently excused and perpetuated the colorism that hindered and haunted Simone her entire life. It was like casting Cardi B to play a young Aretha Franklin.

Also Read: Will Smith Explains Why He Turned Down 'The Matrix' to Star in 'Wild Wild West' Instead (Video)

When literal blackness, and not simply race, is such a crucial part of the narrative, the casting should reflect it. Williams must have been up against seemingly insurmountable racism while trying to break his daughters into the predominantly white world of tennis, but if any of the Williamses suffered the distinct disadvantages of colorism, it would have been the far more visible Venus and Serena. As a behind-the-scenes player, Richard Williams’ particular shade of black would have been less of an overt issue, so to re-enact his life, times and trials convincingly, Smith shouldn’t need to darken his skin.

Interestingly, Will and a color other than black was at the center of another recent social media conversation. That one revolved around his starring role in “Aladdin,” the upcoming live-action remake of the 1992 animated film of the same name. Back in December, viewers got a first look at Smith’s Genie, minus the coloring of the cartoon Jinn that Robin Williams voiced in the original, and many recoiled in horror. Um, but where was the blue?

Then the trailer dropped during the Academy Awards, Smith’s blue Genie made its official debut, and Twitter erupted again: “Too blue!” Some unfavorably compared Smith’s computer-generated hue to “Avatar,” the Smurfs and other unflattering things.

Hollywood, like the rest of the country, probably never will get color just right. Despite the multicultural casting of “Aladdin,” Disney has been criticized for straying too far from the Middle Eastern origins of the story by using a half-Indian British actress, Naomi Scott, to play Princess Jasmine. Accusations of “whitewashing” and “colorism” have followed.

Yes, Hollywood can do so better —  more leading roles and Oscar nominations for Asians would be a nice next start  — but it helps to focus on the fact that movies no longer seem quite as white as they did even a few years ago. Black, regardless of the black actor representing it, has never been more beautiful or bountiful on screen.

BIO Jeremy Helligar
Jeremy Helligar is a journalist, blogger, pop culturist and world traveler whose work has appeared in various publications and on various websites -- including Entertainment Weekly, HuffPost and The Root -- on six continents. In November 2013, after extended stints in Buenos Aires, Bangkok, Cape Town, and Australia, he published his first book, "Is It True What They Say About Black Men?" Since June 2017, he's been working his way around Asia and Europe, but he still hasn't been able to top the time he interviewed David Bowie. The Taj Mahal came close.