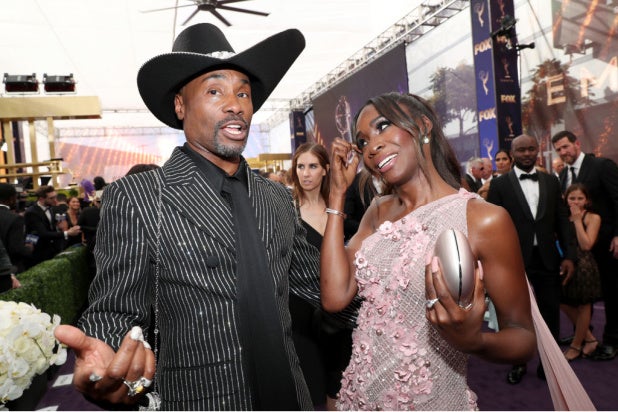 It’s September, and that means it’s time for another edition of the Emmys — but of course it’s not business as usual this year with the coronavirus pandemic preventing large-scale gatherings like major entertainment industry awards shows.

So the Emmys will look just a little bit different this year when the ceremony airs on Sept. 20, with Jimmy Kimmel hosting an ABC broadcast that will attempt to re-create that Emmys feel but without the big stage. As we’ve all had to get used to, the 2020 Emmy Awards will be a remote affair.

You’d think the changes to the show would mean that there’s no red carpet. And, technically, you would be correct. We aren’t going to have folks wearing their lavish best down a physical red carpet in Los Angeles for the Emmys on Sunday. But the red carpet shows will go on even so.

And that’s because, while folks may have to accept their Emmy awards virtually this time, that doesn’t mean everybody will be slumming it in their pajamas.

ABC will air a red carpet pre-show starting at 7 p.m. ET/4 p.m. PT. E!, likewise, will be doing its normal “Live from the Red Carpet” special for the Emmys, and it’ll be hosted by Giuliana Rancic and Vivica A. Fox starting at 6 p.m. ET/3 p.m. PT.

What will these faux-red carpet shows be like? Well, TheWrap spoke with E!’s live events boss, Jen Neal, for the lowdown on the network’s Emmy coverage. She told us we can expect content similar to the usual red carpet shows, just in a new format. In other words, E!’s red carpet show will bring us interviews with as many of the big stars as they can — just remotely from their living rooms.

You’ll be able to stream both of these red carpet pre-shows online, though not for free. E!’s livestream is available on the web right here or in the E! app for mobile and TV streaming boxes — with a valid TV provider login. Likewise, you can stream ABC’s coverage, including the Emmys ceremony itself, on ABC.com here and in the ABC app.

And even though everybody will be staying home for the Emmys this year, that doesn’t mean you shouldn’t expect some cool outfits from the celebs. We really don’t know what to expect — but whatever we end up getting, it probably won’t be boring.

And I’d bet we’ll see at least one celebrity roll out a red carpet in their backyard.