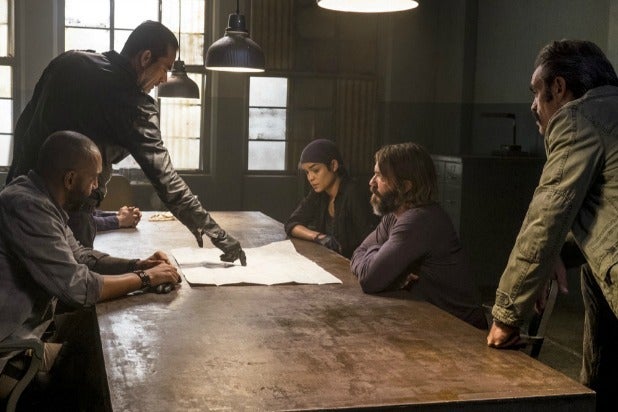 If you didn’t know that season 8 of “The Walking Dead” was coming to a close next week, you probably wouldn’t think the war between the Saviors and everyone else was reaching its conclusion based on what happened this week. No, you’d probably view Negan’s declaration that he has to wipe out everyone at the Hilltop, and Oceanside’s decision to finally join up, as just another escalation in this war that’s gone on for more than two full seasons at this point.

But we know this war has to end — we’re actually already beyond the point in the comics version of the story, in which the battle at the Hilltop was the climax, where the Saviors lost! Since it seems incredibly unlikely that AMC would want to drag this out for another season given the series’ ratings slide this year, we can only assume that, finally, All Out War will come to a close next week.

The question, though, is how it will happen given the way the conflict is going right now. Logically, we could guess there will be one more big battle in next week’s finale and that the Saviors will lose. But a huge battle in which a bunch of characters get killed wouldn’t really be in keeping with the themes of the latter half of this season — which has been all about figuring out a way to end the war that will allow for reconciliation afterward. The way everybody’s been acting this year, another bloody battle wouldn’t fit that bill.

And yet it feels like another bloody battle is the only possible next step for this story.

However,  there is one character who is in a position to prevent that inevitable final battle from occurring, and it just so happens to be someone that fans have been wishing death upon for a while now. I’m talking about Eugene (Josh McDermitt), who may have subtly signaled his intent to betray the Saviors near the end of the episode.

At the end of the episode he gives a grand speech to his bullet-making workers about how they’re going to more than deliver on all the bullets Negan (Jeffrey Dean Morgan) is demanding they make. And while his tyrannical tone is the same as it was at the beginning of the episode when he was all over Father Gabriel (Seth Gilliam) for being sick and messing up a bullet, his change in rhetoric from “we’ll do the best we can” to “we’re going to make a billion bullets tonight for sure” is quite a shift.

As we all know, Eugene has been struggling this season to deliver on his promises to the Saviors, as his bullet-making enterprise has not quite gone as smoothly as he would have hoped. His bullet factory has turned out to be less a “factory” and more an “assembly line,” which is obviously not the quickest way to make enough bullets to supply an army carrying automatic rifles. Expecting them to be able to effectively turn out working bullets on a time crunch is kind of a ridiculous prospect with the setup they have.

And my guess is Eugene isn’t actually going to try to.

Eugene’s key scene this week comes when Daryl (Norman Reedus) and Rosita (Christian Serratos) kidnap him from the factory. They say all sorts of terrible things to him — all of which he deserves, honestly — and he’s very clearly emotionally crushed by it. Then he escapes, and makes it back to the factory, and suddenly he’s extremely gung ho about how great they’re going to be at making bullets.

I think the intent here by the show is for the audience to think that being kidnapped hardened him, making him now fully devoted to the Saviors’ cause because he doesn’t want to end up at the mercy of Rosita and Daryl again. But given the reality of the situation, I interpreted that differently.

I don’t think that Eugene believes that they can deliver all the bullet Negan ordered in the 12 hours or so that they have to do it. Eugene may be dumb in a lot of ways, but he’s certainly not dumb in the sort of way that he would incorrectly estimate how many bullets they could make in that timeframe.

Also Read: 'Walking Dead': Why Carl's Death May Be the Most Important Death in the Show's History (Commentary)

No, how I saw that scene is that his encounter with Rosita and Daryl made him decide to finally take a stand for something more than just his own survival. I think he’s going to deliver buckets of unusable bullets to the Saviors next week, and this is how the final bloody fight will be avoided.

Eugene’s bullets will fail, and the Saviors will have to surrender, and that will be all she wrote about All Out War.

Or maybe it will be something else. I am, after all, just speculating. But I feel pretty good about this guess. We’ll find out next week.