Willie Nelson will be the subject of a new docuseries that is described as the definitive look at the country musician’s life and career. The series has the blessing and participation of Nelson himself.

“Telling Willie’s story has been a lifelong dream of ours, and we feel privileged to realize this dream with Thom, Oren, and Sight Unseen”, Rothbaum and Wortman said in a statement.

“Words like ‘honored,’ ‘excited’ and ‘humbled’ don’t come close to describing the way we feel about being entrusted with telling Willie’s story. And what a story it is! We are celebrating the music, the career, the long road, the family, friends, and history,” Zimny and Moverman said. “But, more than anything, we are piecing together a narrative — one never before seen in its entirety — about an extraordinary man with a unique ability to bring people together; folks of all races, orientations, genders, political ideologies, and musical leanings. These days, we sure could use the healing powers of Willie Nelson.”

At 88 years old, Nelson has continued to go back “on the road again” and be as active as ever. He was announced as part of the lineup for the upcoming Farm Aid in Nashville, and recently worked with 13 major sports leagues as part of the Ad Council’s national ad campaign on vaccination awareness. His album “That’s Life,” a tribute album of Frank Sinatra songs, hit No. 1 upon its release in February. His latest book is “Willie Nelson’s Letters to America.” Also this year, Nelson was celebrated in a music special on A&E called “Willie Nelson: American Outlaw.” 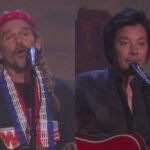