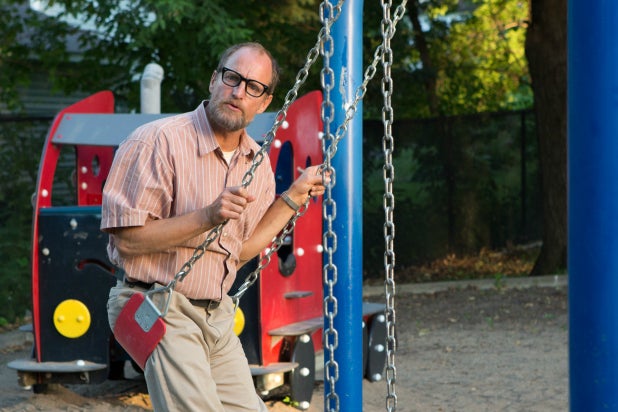 Loneliness looms over “Wilson,” adapted from the graphic novel by Daniel Clowes (“Ghost World”) by Clowes and director Craig Johnson (“The Skeleton Twins”). In an early scene, it literally hangs over Wilson’s (Woody Harrelson) head as he walks past a movie theater showing Vittorio De Sica’s 1952 classic, “Umberto D.”

In that sorrowful, Italian neo-realist masterpiece, the elderly Umberto is the embodiment of loneliness, and suffers a near thorough destitution, his only salve the companionship of a pet dog. Wilson, Umberto’s toxic heir, has a dog, too, but his loneliness is self-imposed: Wilson is an obnoxious jerk.

Not that you’d know to listen to him talk about himself. And he loves to talk about himself. In voice-over narration, Wilson bemoans modern life and its isolation, its lack of manners and camaraderie. He, alone, seems to understand what’s wrong with everyone. Everyone except himself, that is, since his answer to the estrangement of strangers is to invade their personal space and initiate intimate conversation.

See Video: Woody Harrelson Has No Filter in Funny Trailer for 'Wilson'

Wilson is a needy harasser, a misanthrope demanding affection who gets angry when it’s not instantly reciprocated. He’ll tell you you’re ugly — he’s the kind of man who thinks he’s doling out necessary truth — and then blame you for taking offense. If everything fell to pieces in the end for him, you might think he deserved it.

Wilson’s episodic travels take him on a kind of queasy carnival ride to not-quite-redemption, and it’s a journey fully stocked with talented character actors, all of whom are operating at peak irritability or rage. He winds up in a pet shop where he hits on a furiously resistant woman (Lauren Weedman, “Looking”). He goes on an ice cream date with a total stranger (Margo Martindale) and instantly rejects her. He sits by the bedside of his comatose, dying father, wondering where it all went wrong. He pops by the home of friends who dislike him (Brett Gelman, “Love,” and Mary Lynn Rajskub, “24”) to find that they’re moving away. Then he makes their decision all about him.

Not finding the love to which he believes himself entitled, he boards his dog with neighbor Shelly (Judy Greer) and goes off to hunt for his ex, Pippi (Laura Dern), whom he describes as a “toxic, soul-draining vampire.” What Pippi really is, though, is an addict trying to get clean, one who doesn’t need guys like Wilson mucking up her recovery. Wilson doesn’t care; he has needs.

Setting in motion what would, in almost any other narrative, constitute a heroic series of challenges, the kind designed to create a better man by story’s end, Wilson’s reunion with Pippi reveals a daughter (Isabella Amara, “The Boss”) he never knew he had, a sort-of kidnapping, a stint in prison, an existential crisis, and a new chance at love. That he almost completely fails to learn anything from these scenarios is what will either endear or repel audiences to “Wilson.”

And if this all sounds resolutely unappealing, that’s because on paper, it is. But brought to life on screen, “Wilson” is a fractured, heartsick, funny adventure in mundane misery.

Clowes’ adaptation of his own screenplay is warmer and sweeter than his graphic novel, less fatalistic and deadpan. He lights the way for his movie-Wilson in the same measure that he refuses the pen-and-ink version. Johnson’s equally generous direction feels bright and cheerful, even as characters hurl malicious comments at one another. Cruelty seems to bounce off these people. They forgive and keep moving, keep hurting each other, keep hoping someone else will step in and be kind.

Casting the charming, unassailably likable Harrelson as the quarrelsome lead is either a stroke of genius or a grand mistake of casting. His face, one that invites affection, softens everything that sneaks out of his mean-spirited mouth. As if to counter that, the presence of Dern spikes up the atmosphere, and when Cheryl Hines shows up as Pippi’s combative, brittle, and seemingly perfect sister, “Wilson” lets its most hateful inner self shine.

The film suffers somewhat for these choices, allowing Wilson grace and shots at happiness that he has not and will never earn. It feels, at times, like Clowes has deliberately muddied his own vision with uncharacteristic hope. Or maybe Wilson’s third act rewards are in the service of a truth that’s even darker: that no matter how unworthy certain middle-aged white men are, no matter how selfishly they behave, someone out there will always give them the pass they think they deserve, one that will save them from, in Wilson’s words, “fading into oblivion, with no trace of my existence.”

If he’s the kind of man who fails laterally in a system designed to protect him, one who never has to worry about winding up alone at the end of life, with only a loyal dog as companion, then that means he’s not unique, and “Wilson” is a cautionary tale, a warning to exit the theaters and sidestep all the other Wilsons out there.

They’re unreliable narrators. Back away slowly.