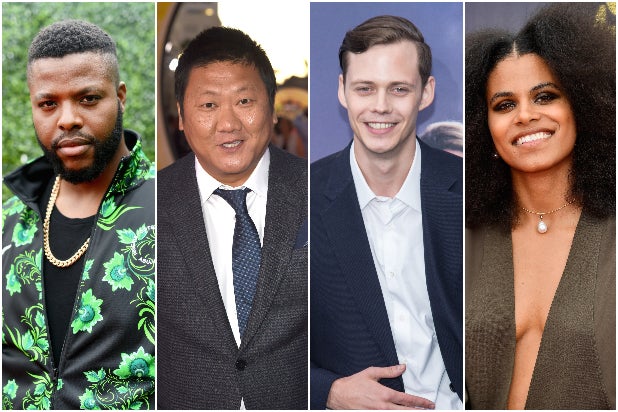 Winston Duke, Zazie Beetz, Bill Skarsgård, Benedict Wong and David Rysdahl are set to star in “Nine Days,” a drama with supernatural, spiritual elements, from director Edson Oda, it was announced on Friday.

Oda will make his directorial feature debut on the project, which is produced by Mandalay Pictures, Nowhere, Juniper Productions and MACRO, in association with The Space Program, Mansa Productions, Oak Street Pictures, 30WEST, and Datari Turner Productions.

“I’m thrilled to be working with such an incredible cast and amazing team. So grateful for all the support I have received. ‘Nine Days’ is a very personal story to me, and I can’t imagine a better team to help me tell it,” Oda said in a statement.

In a house, distant from the reality we know, a reclusive man named Will (Duke) interviews prospective candidates Emma (Beetz), Kane (Skarsgård), Kyo (Wong), and Mike (Rysdahl), who are each personifications of human souls, for the privilege that he once had: to be born.

“This is one of the most beautiful and complex human stories we’ve been fortunate enough to be a part of, so eloquently spanning across cultures and vantage points, yet set in a world that we’ve never experienced before. Being able to partake in creating something so wholly original, and facilitating the realization of Edson’s singular vision with the help of this outrageously talented cast and crew, is truly exciting,” producers Berman, Kongsved and Tunstall said in a joint statement.

Oda is a Latin Grammy-nominated writer/director and 2017 Sundance Screenwriters Lab Fellow. His previous work includes the award-winning short “Malaria,” and he’s the winner of a Gold Lion and three Bronze Lions at the Cannes International Creativity Festival.

“Nine Days” is co-produced by Yira Vilaro of MACRO, Patrick Raymond of Mandalay Pictures and David Horwitch of Nowhere.

Duke most recently starred in Jordan Peele’s “Us” and will next be seen in Peter Berg’s “Wonderland.” He’s repped by CAA, and Hansen, Jacobson, Teller, Hoberman, Newman, Warren & Richman.

Beetz stars on “Atlanta” and was seen in last year’s “Deadpool 2.” She was also seen in the Steven Soderbergh film “High Flying Bird” and will star opposite Joaquin Phoenix in “Joker.” She’s repped by Gersh, Grandview, Sloane, Offer, Weber & Dern.

Skarsgård reprises his role as Pennywise in “It: Chapter Two” and is repped by WME, Magnolia Entertainment, Hirsch Wallerstein Hayum Matlof and Fishman.

Wong was last seen in “Avengers: Endgame” and stars in Ang Lee’s “Gemini Man.” He is repped by Anonymous Content, Hirsch Wallerstein Hayum Matlof and Fishman.