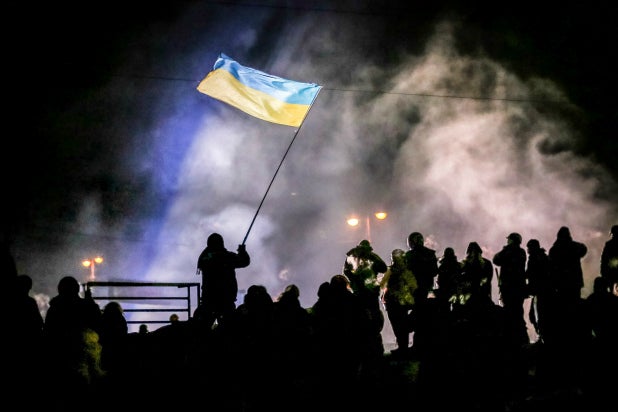 Often when there’s an instance of destruction or tragedy, people recall it as having played out just like a movie. In “Winter on Fire: Ukraine’s Fight for Freedom” — debuting theatrically and on Netflix October 9 — a prematurely grown-up 12-year-old sees the truth of the 2013-14 Ukrainian revolution. “It wasn’t like a fictional show we watch on TV,” he says. “It was a shocking reality we faced.”

At the beginning of the “Maidan movement” — also called the “Revolution of Dignity” — in November 2013, director Evgeny Afineevsky arrived with his camera at Maidan, the central square of Kiev, to document what was supposed to be just a student protest against the decision of the country’s dictatorial president, Viktor F. Yanukovych, not to join the European Union and instead to align with Russia.

It was a movement whose word spread via Facebook; a young doctor who also traveled to Maidan said she was inspired by the students, to whom she gave a verbal pat on the head: “Their souls are so pure. They believe in Ukraine so much.”

Things got ugly fast, however. As the film opens, Afineevsky asks a young man to say something about what’s going on. “This is the Ukraine Revolution,” he responds. “It’s fun… I just dragged a dead body.” Purity officially soiled.

Despite the peacefulness of the protest, with people of all ages coming to join the students in an Occupy Wall Street-style camp-out, the Ukraine government released the hounds in the form of special police unit Berkut. Cries of “Why?” can be heard as the authorities rush the crowd and beat individuals, some of whom are already down. Yanukovych even boasted, “The troops beat everyone with iron sticks instead of plastic ones.”

Afineevsky stays throughout the 93-day protest, which only gets more violent and more nonsensical as the activists change locations (while remaining unarmed) and policymakers try to quell them. The mass of people, which increases in volume and soon includes everyone from clergy to ex-military members, demands a new government and the true freedom that would result from being considered part of Europe. Though they seem to be doing nothing but falling to brutality, they continue. 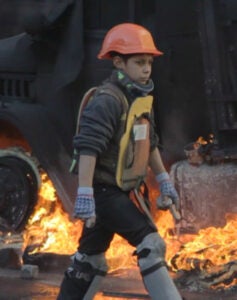 “Winter on Fire” is more polished than a typical on-the-ground documentation of unrest. As the unpredictable drama unfolds, Afineevsky integrates footage shot by activists. There are steady aerial shots and simple maps to help you place the action, and the director has a handful of people who were there telling the story throughout the film, which lends clarity to the chaos. On one hand, watching police relentlessly wallop protesters with batons gets repetitive. On the other, this ugly truth can’t be seen enough.

Although the violence is impossible to comprehend, especially after the many times activists plea directly with officers not to carry out the orders of a tyrant and harm their own people like animals, there are remarkable moments here, too. Most amazing, of course, is the protesters’ bravery and will. But it’s also impressive to see how these strangers managed to organize: Medical stations, makeshift kitchens, areas for the chilled to get relief through clothes donations pop up as if in a little city.

When the bloodletting skyrockets, doctors and nurses tend to patients as best they can, though not without emotional consequences: “Having to decide who was already dead was the hardest thing,” the doctor said. There just wasn’t enough time or manpower to resuscitate everyone, hence the temporary morgue.

Being able to bear witness firsthand to this three-month struggle is an incredible privilege, albeit a heartbreaking one. But in the end, the message is positive: The documentary is a testament to the human spirit, to unity in times of depravation, to the ability of common individuals to effect change at the highest level.

After experiencing warlike conditions that continuously eroded the activists physically, mentally, and emotionally, they prevailed, and their oppressor fled. As one man said, these people were indeed fighting till death to better their country. Those who fell didn’t die in vain.