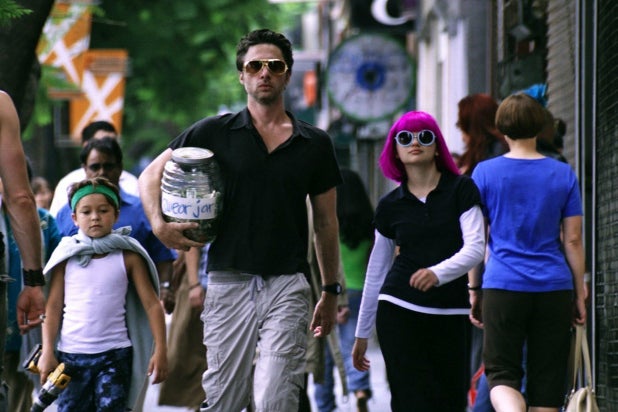 Let’s give credit where it’s due: Zach Braff has made another Zach Braff movie. That might sound commonsensical, even obvious or inevitable, but at least the TV star-turned-indie darling-turned-involuntary eyeroll-inducer has an aesthetic and viewpoint he can call his own.

Braff’s signature mix of earnest ideals, visual flair, showy epiphanies, cloyingly clever humor, and sad-young-man solipsism made his directorial debut, “Garden State,” an influential charmer. Its follow-up, “Wish I Was Here,” struggles to get out of the earlier film’s shadow.

See video: Zach Braff Brings the Heart in New Trailer for ‘Wish I Was Here’ (Video)

I’m not a fan of Braff’s self-satisfied quirky-twee style, but enough people are that the he raised $3.1 million on Kickstarter, in large part to ensure he could afford to make “no compromises.” The death- and religion-obsessed “Wish I Was Here” is such a manifestly personal project that it’s a shame it isn’t even more idiosyncratic.

After all, only Braff’s unsentimental acceptance of mortality and multi-faceted explorations of Judaism, two themes rarely explored in mainstream cinema, keep his sophomore effort from being wholly derivative of the life-affirming indies that used to be synonymous with the Fox Searchlight brand. (For the record, “Wish I Was Here” is distributed by Focus Features.)

Braff plays Aidan, a struggling actor in his mid-30s, subtly discouraged to quit his dream by both his overworked wife Sarah (Kate Hudson) and, more loudly and insistently, by his dying father Saul (Mandy Patinkin). Saul’s decision to treat his stage-four cancer with a pricy, experimental procedure means pulling Aidan’s kids out of Jewish private school, until now paid for by their grandfather.

Dealing with the disappointment of not getting to be what you wanted to be and having to send your children to public school are the kinds of dilemmas for which the phrase “first-world problems” was coined. Braff himself is the film’s weakest performer, stretching his already large features to sitcom-ish broadness, and so the main storyline, narrowly focused on Aidan’s professional failures, fails to connect.

In a pleasant surprise, then, Adam and Zach Braff‘s script fares much better with the B-plot. Though Aidan’s terrified of sending his children to public school (known as “regular school” to the rest of us), he had never been entirely comfortable sending his children to a yeshiva. His suspicion that his preteen daughter Grace (Joey King) and young son Tucker (Pierce Gagnon) are being indoctrinated first finds expression in a sweet scene in which Grace explains why she’s looking forward to shaving her head after marriage (an Orthodox tradition), but the notion gets more complicated when Aidan realizes the comforting structure religion has provided his anxious daughter.

Aidan and Grace’s father-daughter relationship form the film’s most compelling arc, and thus it’s a slight letdown when the camera focuses on Aidan’s attempts to reunite his overbearing father and his oversensitive little brother Noah (Josh Gad) one last time before the former passes away. An unconvincing old wound has separated them for years, and while Patinkin and Gad endow their characters with heart and hurt, respectively, neither is given enough material to elevate their relationship beyond archetype.

Braff clearly attempts to compensate for his characters’ lack of development with improbable Big Moments that punctuate their emotional journeys: Aidan buys Grace a bubblegum-pink wig, takes his kids out for a spin in a showroom-quality Aston Martin, confronts the creep harassing his wife at work, and helps his children embrace the sunset in a picturesque desert.

Those Big Moments can represent catharsis, however, only to a viewer already on Braff’s wavelength. Otherwise, they merely strike audience members (including myself) as self-indulgent, even silly. And that’s probably all right with Braff.

Like the “Veronica Mars” movie, its Kickstarter model and predecessor, “Wish I Was Here” is a film for the fans and the true believers. So let them enjoy it while the rest of us wonder what the hullabaloo is all about.